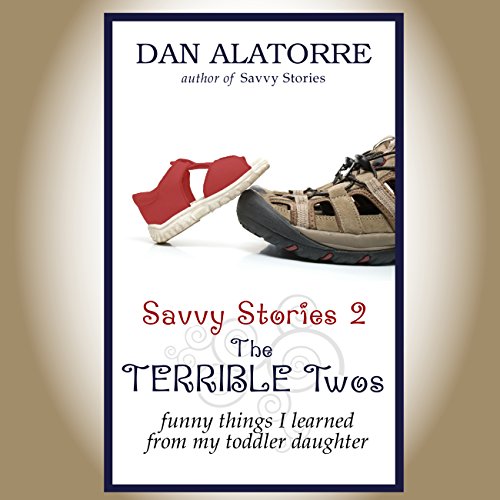 The Terrible Two's: Funny Things I Learned from My Toddler Daughter

The sequel is even better than the original! Savvy Stories 2: The Terrible Two's picks up right where Savvy Stories left off. Enjoy more of our favorite little girl as she learns to feed the cat (almost), decides to give herself a haircut, decorates the cabinets using Sharpie Markers, and more. Hilarious and heartwarming stories about the lost, magical moments of childhood, viewed through the heart of a father.

My stuff is written for a very small audience, but hopefully appeals to a large audience once they get a chance to sample it. That small audience is, in reality, one person. I think it would be really cool if one day I can hand my daughter a book and say, "Here, this is all about how much fun it was to hang out with you."

The honesty of a two-year-old is amazing.

Are they all like this? I hope so. What a shame that probably has to change.

I've caught my daughter doing stuff where I would expect an older kid to lie, and she persists in telling me exactly what she did, ratting herself out completely. That just can't keep up, can it?

Whenever it's just the two of us home along and I need a shower, like after I've worked out but my wife isn't home to watch our daughter, I'll put Savvy on the bed in the master bedroom and leave the bathroom door open. That way, she can watch cartoons while sitting on the bed, and I can shower.

With the door ajar, she can't see me, but she can certainly come in if some crisis were to happen - like the DVR switched her cartoon off and put on the news - and I can hear her if were to cry for some reason - like when she was trying to use the headboard as a balance beam and got wedged between the mattress.

What listeners say about The Terrible Two's: Funny Things I Learned from My Toddler Daughter

I could relate to 99.999% of the stories he told about his daughter. My son and daughter did all these things! I laughed til I cried & til my gut ached. I loved it & I hope he continues to write about her as she grows up. I'd love to hear that I'm not the only one who goes thru these things with my kids.

Would you try another book from Dan Alatorre and/or Tim J. Gracey?

I think I would have enjoyed it if was a book to read. I felt like the narrator should have been more animated. I found listening to him annoying.

Would you ever listen to anything by Dan Alatorre again?

I am sure I would.

i found that he wasn't animated enough. I would like to read the book but I couldn't take the narrators voice, for this book.

What made the experience of listening to The Terrible Two's: Funny Things I Learned from My Toddler Daughter the most enjoyable?

I loved part two of this series just as much as I loved part one. Savvy is getting more adorable the older she gets. The stories continue to be hilarious, emotional, and inspirational.

I love that this family is normal. Dan doesn't try to make himself out to be father of the year or his daughter to be a prodigy. They buy used toys off craigslist and buy their birthday cakes from Publix just like the rest of us. Savvy throws tantrums and mom and dad lose their patients.

I was dubious in the beginning because the first two stories didn't seem to really be about Savvy. They weren't bad, but they didn't feel relevant to what the book is supposed to be about, but the sunglass story that followed them made up for things.

I don't have children, but since I have eleven nieces and nephews, and most of my friends have children, I could relate to most of the stories. The Winnie the... well, I won't say what Savvy says, brings to mine one about my best friend's son. He loves toy cars. He loved to bang them against things. When he did he said a word that should have been bam but wasn't. The word sounds just like bam, but with a d. We couldn't get him to stop saying it because he didn't hear the difference in the words. My best friend lived in mortification for about three months.

On a side note, I have to stop listening to these books in public. I nearly wrecked my car in the 'that is a pee pee right there story.' I burst into laughter while trying to make a turn in five o'clock traffic, not a good thing.

There are few times when things get to be a bit repetitive. He tells us a number of times in the same story that his mom made pound cake from them when they were little. There are a few times where the narrator of the audio book skips words or letter. In one place it sounds as if he says I stead when he meant instead. These instances were few and far between and were probably only noticeable because the version of the novel I have is an audio one.

Overall this is a wonderful series that I highly recommend and will continue to follow.