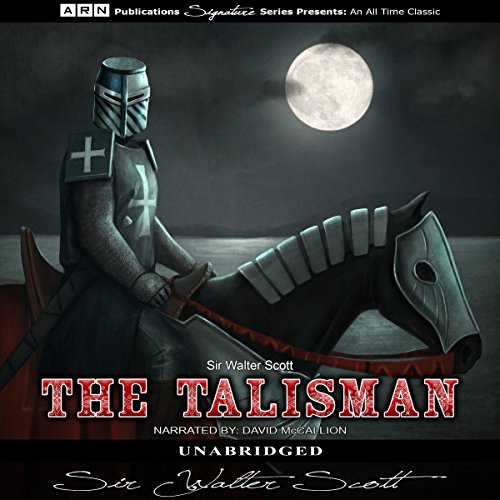 The Talisman revolves around the Third Crusader's camp in the Holy Land whereby there exists a truce between the Christians and the Muslims. The camp, which is led by King Richard I of England (the Lion-heart) who is grievously ill, is being torn apart by tensions between rival leaders.

Sir Kenneth, the Knight of the Couchant Leopard, is one of the knights who follow King Richard to the Holy Land of Jerusalem during the Crusade. He is sent on a mission to the desert far from the camp where he stumbles upon Muslim leader Salah-ed-Din Yusef ibn Ayub or Saladin disguised as a Saracen Emir and the two engage in battle whereby none of them is injured. Since a truce is in existence between the two conflicting factions, they strike up a friendship and continue their journey together.

Sir Kenneth helps Saladin gain entry into the Christian camp posing as a physician and he helps cure King Richard of his ailment. The King is pleased with Kenneth and he entrusts him to guard the banner of England which he does unsuccessfully after Richard's wife Queen Berengaria distracts him with a message from Lady Edith Plantaget who the knight is infatuated with.

Sir Kenneth is dishonored and only escapes execution after the Emir agrees to take him as a slave and the events that follow shape the story that is full of deceit and high handedness as King Richard struggles to maintain control of the camp while also focusing his crusade of the Holy Land.

What listeners say about The Talisman

a simple story but a joy to listen to

This brief tale of crusader knights uses wonderful rich language. My only complaint is with the performance, the reader evidently lacked vocabulary as he mispronounced a number of words, most egregious was "kyrie eleison" (lord have mercy), but it was not enough to sully the fun and his skilled use of different voices for the characters. I highly recommend this recording.

The narrator is great! Couldn't detach myself from the novel! Great plot too! Every time you think you know everything Sir Walter Scott has a new twist for you.

The best way to describe the narration of this book by the legendary Sir Walter Scott is ‘atrocious’. It is a recording that should never have been released. The reader is dull, unimaginative and disinterested in the story. I was so distracted by his wearisome speech that I could not finish the book.