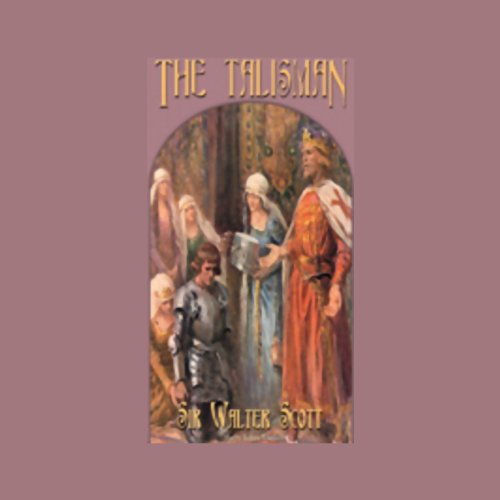 The Crusaders, led by Richard I of England, are encamped in the Holy Land, and torn by the dissensions and jealousies of the leaders, including, besides Coeur de Lion himself, Philip of France, the duke of Austria, the Marquis of Montferrat, and the Grand Master of the Templars. The army's impotence is accentuated by the illness of Richard.

A poor but doughty Scottish crusader, known as Sir Kenneth or the Knight of the Leopard, on a mission far from the camp encounters a Saracen emir, with whom, after an inconclusive combat, he strikes up a friendship. This emir proves subsequently to be Saladin himself, and he presently appears in the Christian camp in the disguise of a physician sent by the Soldan to Richard, whom he quickly cures.

Meanwhile, Sir Kenneth is lured from his post by Queen Berengaria, Richard's wife, who in a frolic sends him an urgent message purporting to come from Edith Plantagenet, for whom Sir Kenneth has a romantic attachment. During his brief absence, his faithful hound is wounded and the English flag torn down. Sir Kenneth, thus dishonored, narrowly escapes execution at Richard's order by the intervention of the Moorish physician, who receives him as his slave. Kindly and honorably treated by Saladin, he is sent, in the disguise of a black mute attendant, to Richard, whom he saves from assassination. Richard pierces Kenneth's disguise and gives him the opportunity he desires of discovering who wounded the hound and tore down the standard.

As the Christian princes and their forces file past the re-erected standard, the hound springs on Conrade of Montferrat and tears him from his horse. A trial by combat is arranged in which Sir Kenneth defeats and wounds Montferrat, and is revealed to be Prince David of Scotland. The obstacle that his supposed lowly birth presented to his union with Edith Plantagenet is thus removed.

"In narrating the romance, Robert Whitfield excels at phrasing, which, accompanied by his pleasant voice and British accent, makes this...pleasant listening." (AudioFile)

What listeners say about The Talisman

I had only dim recollections of The Talisman as one of Scott's lesser-known works (as compared with Ivanhoe, anyway), but when I found this version, read by favorite narrator Robert Whitfield (aka Simon Vance) I had to give it a try. And I was delighted! It's a wonderful romp, with surprisingly liberal views of Saladin and his host; King Richard comes off rather poorly in comparison. The secret identities got a bit far-fetched, but it was all entertaining. Recommended!

I'll keep this short and sweet. I was so enthralled with the reader and the story that I lost track of time in my 1 1/2 commute into Seattle. My friends are tired of me talking about it.

This book surprised me. I liked the historical flavor, which had some degree of accuracy, along with a lot of fiction. But the story is great.

I have to say the language is quite a chore to get through. It is flowery and erudite. I decided to listen to the whole thing again and I liked it very much more the second time. If you can catch the whole meaning of the story from listening to it one time, I would like to meet you!

Sir Walter Scott is a superlative writer. My first recommendation of course would be Ivanhoe. It is interesting to contrast Scott's writing with Hemingway's direct and simple language. The reading was great and enjoyable.

It feels odd to me giving four stars to a classic writer's efforts, but I have done the deed. At the same time, it is worth the effort to "get it."

Sir Walter Scott is a master of the historical novel, and probably one of the first to have employed the genre as we know it with expert craftsmanship. The themes of this book, like Ivanhoe, include the honor and greatness of chivalry, respect between enemies, and the oft-hidden nature of nobility.

I tried to read this book and found it dull and difficult to get through, but I had to read it for a class. Then I found it here and I have really enjoyed it. The narration is brilliant and the book is perfectly suitable for beeing read aloud!

I would recommend this book to everyone. I thoroughly enjoyed it. The narrator did a superb job as well.

"The Talisman" is a wonderful jaunt into the crusades and explores, along with the hero's adventures, the legendary rivalry and friendship of King Richard and Saladin. Scott skillfully weaves the lesser tale into the broader history, bringing to life the history and the culture of the medieval era, with all its prejudices, passions, and politics. The story itself is peak Scott - a gallant hero, a virtuous and strong heroine, and a complex web of unlucky circumstances that keeps them apart and in the end, of course, brings them together.

And I gotta say - I'm pretty sure he nailed King Richard! While the story is a little slow at first (but so entertaining that I really didn't mind), Scott captivates you once he's in the thick of it as only he can. The narration is excellent, well-paced and expressive.

What made the experience of listening to The Talisman the most enjoyable?

The twists and turns of the plot and the delightful 19th century prose. It is a rare joy to go back to such a well constructed classic.

What other book might you compare The Talisman to and why?

It certainly holds it's own, and then some, amongst the rest of the Waverly Novels (Rob Roy, Ivanhoe, et al).

The reading is clear and flawlessly handles the rich language of the book, making the listening a real pleasure.

This is a mediocre, long-winded book in itself. The narration is superb though, if you like the flowery language of Sir Walter Scott. Personally, though, the story was very slow. If you really want to listen to it, go with the Abridged version.

Okay Reader, But a Bit Slow

Would you try another book from Sir Walter Scott and/or Robert Whitfield?

I might buy another book read by Robert Whitfield, but probably not any more Sir Walter Scott books. The story was drawn out, plodding, and though the overall plot was good, too many words. Scott is a good writer as far as the use of the language, but he is not concise.

Would you be willing to try another book from Sir Walter Scott? Why or why not?

I tried two, don't think I will try another. I had heard he was a good classic writer but a bit to slow and verbose for me.

Robert Whitfield was a good reader, not painful to listen to, I would like to hear him read a different author and see the difference.

Could you see The Talisman being made into a movie or a TV series? Who should the stars be?

Yes. The main actors Viggo Mortensen should be the main character.

Exciting tale of chivalry and treachery during a truce between Crusaders and Saracens. Intrigue romance and surprises mixed together make this intoxicating tale.