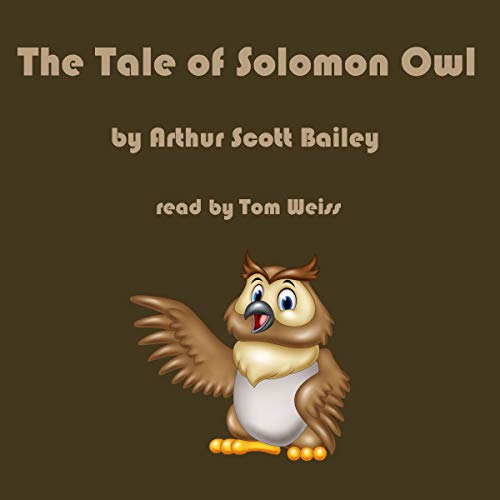 The Tale of Solomon Owl

Solomon Owl lives in Pleasant Valley. As with most owls, he is a loner. He doesn't have many friends and instead, often sees others smaller than him as food rather than friends.

We discover how Solomon deals with other animals in the Pleasant Valley woods such as Mr. Frog the Tailor, Cousin Screecher, Fatty Coon, Mr. Crow, noisy Jasper Jay, and Aunt Polly Woodchuck the herb doctor. The characters in Bailey's books can be grumpy and predatory and will bite when aroused. Traditional virtues - honesty, reliability, loyalty, perseverance - are encouraged and rewarded.

Arthur Scott Bailey was an American writer who penned more than 40 children's books. Mr. Bailey centered all his plots in the animal, bird, and insect worlds, weaving natural history into the stories in a way that won educator's approval without arousing the suspicions of his young readers. He made it a habit to never "write down" to children and frequently used words beyond the average juvenile vocabulary, believing that youngsters respond to the stimulus of the unfamiliar.

This book was published in 1917 as part of Arthur Scott Bailey's "Tuck-Me-In Tales".

What listeners say about The Tale of Solomon Owl