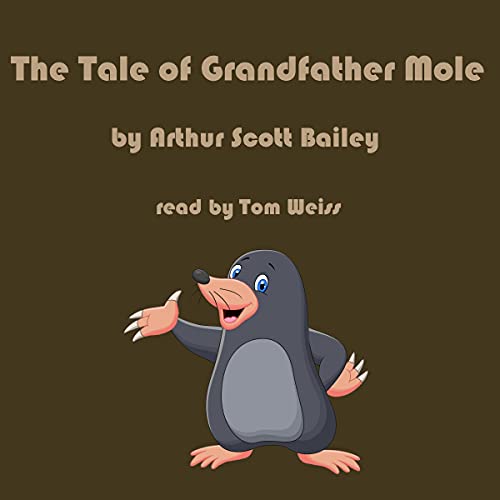 The Tale of Grandfather Mole

Many of his animal friends consider Grandfather Mole to be strange. It is not that he is strange but rather quite different from most of them. Grandfather Mole spends most of his time in his favorite place, underground. He loves digging and nature has equipped him with the body, legs, and feet to dig. Surprisingly, he can also swim quite well. Because Grandfather Mole spends so much time underground, he has very poor eyesight and hearing. He loves angleworms and spends a great deal of his time finding and eating them. Some of Grandfather Mole's friends try to get him to dig food for them. But because he is always hungry, and although he promises to help some, he generally has no time to hunt for others. And his personality is quite unique.

Arthur Scott Bailey, the author, gives each of Grandfather Mole's friends and acquaintances a unique personality, not unlike that in the wild, and like any good children's book, teaches us about their unique behaviors while promoting good moral values. Bailey was an American writer who penned more than 40 children's books. Mr. Bailey centered all his plots in the animal, bird, and insect worlds, weaving natural history into the stories in a way that won educators' approval without arousing the suspicions of his young readers. He made it a habit to never "write down" to children and frequently used words beyond the average juvenile vocabulary, believing that youngsters respond to the stimulus of the unfamiliar. This book is part of the Tuck Me In Tales series written by Mr. Bailey.

What listeners say about The Tale of Grandfather Mole