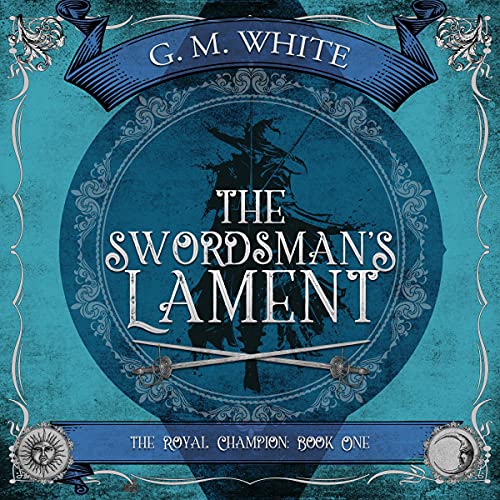 A legendary swordsman accused of murder.

Loyalty counts for nothing when the king demands blood.

In the ancient city of Villan, wealth and power descend from proximity to the throne. As royal champion and confidant to the king, Belasko thought he was beyond intrigues and machinations. But when the grief-stricken king demands vengeance for his murdered son, Belasko discovers he is expendable. His options are clear: find the killer or die for a crime he didn’t commit.

Forced into the city’s bleak underbelly as the palace mobilizes against him, Belasko finds unlikely allies in his hunt for the truth. Can the veteran survive to protect his friends and prove his innocence?

Join Belasko as he hunts the real killer from the royal court to the depths of the city’s criminal underworld, finally learning the true meaning of the Swordsman’s Lament.

A story about friendship, betrayal and doing the right thing no matter the cost, this breakneck fantasy thriller is perfect for fans of David Gemmell, Sebastien de Castell, and Miles Cameron.

Praise for The Swordsman’s Lament:

“A quick paced story that left an imprint on my soul. Up there with the absolute best.” (The Coy Caterpillar Reads)

“Fast-paced action throughout... a roller coaster of a read. It’s fantasy and action that will appeal to readers of Bernard Cornwell.” (Books Behind the Title)

“A great introduction to a new hero and world that I look forward to returning to.” (Beyond the Books)

“From the first page, I was hooked! …If you love knights, swords, or medieval stories, this is definitely one for you!” (Dani Hoots, author)

What listeners say about The Swordsman's Lament

A royal murder mystery sits at the core of this fantasy novel - it drives a national hero into exile, where he must discover the truth or face certain death.

The characters and dialogue are fantastic, the action and intrigue realistic but not bogged down in technicalities. Belasko, the hero swordsman, is a modern day Errol Flynn with sharp wordplay to match the swordplay of his gleaming blade.

The audiobook is very well produced and narrated - in a slightly sardonic tone that matches the mood of the novel, yet is never overplayed.

Fantasy elements are interwoven sparingly, hinting at a broader world that I can’t wait to explore more fully.

An excellent story and enjoyable listen

I very much enjoyed this book the narrator was fantastic and I hope to hear more from this person in the future.

The story is fast paced and lean there was only what the listener needs to understand and enjoy the book, language is well chosen. The action aspects were quick and well done, but I loved the intrigue and sense of mystery.

I liked the characters and that the story was not to dark or graphic. I was able to really enjoy the listening experience.

I look forward to the next book.

One of the best books I've read this year.

The Swordsman's Lament is genuinely brilliant. When I had to turn the audiobook off after my commute to work I was looking forward to getting back on the road, and back in the story.

Belasko is a great new hero. This series deserves to blow up. I hope it does. The story is a simple but compelling one. A good man accused of a murder he didn't commit escapes from the dungeons to clear his name.

The writing is excellent and G. M. White is an exceptional storyteller.

There is an equality to the storytelling too. Strong female characters. Female guards, they/them pronouns, ambiguous sexual orientation. It's not at the forefront of the story, but it's there in the subtle world building.

The nobility / underclass devide is tackled with an edge as sharp as Belesko's rapier.

The Swordsman's Lament, "the older I get the better I was", is put to the test and Belasko prevails.

There is nothing to not like about the book. Just read it already, it's great.

I believe it was the narrator's first foray into reading audiobooks and I hope he reads more. He sounded very much like Tom Hiddleston. It was like having Loki read you a book, and who wouldn't want that?

I'd read The Swordsman's Lament last year as part of SPFBO and really enjoyed it. Hearing it brought to life on Audible - in an impressive debut by narrator Pieter Lawman - only made it better. This is hopefully the start of a fantastic fantasy series.

Once I started this audiobook I flew through it. The characters are well developed and the stakes are high making you really care what happens to them. Belasko is a hero that you root for the whole way through as he deals with betrayal and injustice and the story is so fast paced towards the end there’s no way you’re putting it down before finishing. I’m looking forward to another instalment in his story.
Also, the narrator is great and it’s easy to fall into the story through his narration which is make or break for me and audiobooks.

An amazing story which keeps you gripped.

This story is a great opener to a series, from the first 5 mins I was gripped until the end and now need to listen to book 2. This book is full of sword fights, intrigue and a man fighting for his life whilst finding the true killer and protecting those around him. The narration is perfect, the voice he uses for the main character came through and transformed the words into a film inside my head, which is what I love about a great audio book. I don't normally listen to these type of historical fantasy but this author has convinced me to try more and I will definately be getting the next audio book by G.M. White.
It is a book I will re-listen to and discover more details and twists.
Get this book, it will not disappoint you... I highly recommend!