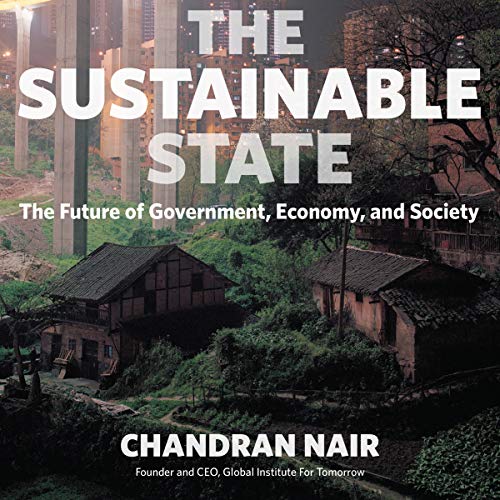 The Sustainable State: The Future of Government, Economy, and Society

The free-market, limited-government development model has been an ecological and social disaster for the developing world. Sustainable and equitable development is only possible with the active involvement of a strong central state that can guide the economy, protect the environment, and prioritize meeting their people’s basic needs.

In this sure-to-be-controversial audiobook, Chandran Nair shows that the market-dominated model followed by the industrialized West is simply not scalable. The US alone, with less than five percent of the world’s population, consumes nearly a quarter of its resources. If countries in Asia, where 60 percent of the world’s population lives, try to follow the Western lead, the results will be calamitous....

Instead, Nair argues that development must be directed by a state that is willing and able to intervene in the economy. Corporations, which by design demand ever-expanding consumption, need to be directed toward meeting societal needs or otherwise restrained, not unleashed. Development has to be oriented toward the greatest good - clean drinking water for the many has to take precedence over swimming pools for the few. He provides three compelling case studies demonstrating the benefits of such strong state governance and the findings of weak state governance.

This will mean rethinking the meaning of concepts like “prosperity”, “freedom”, “rights”, and whether democracy is always the best way to ensure responsive government - as Nair writes, “A democracy that cannot work to improve the life of its citizens is not better than a non-democracy that can actually improve quality of life.” Many people will find these to be challenging ideas, but what Nair offers is a model suited to the realities of the developing world, not the assumptions of the dominant culture.

What listeners say about The Sustainable State: The Future of Government, Economy, and Society

had some good interesting points and made me think more . worth to give it a try

The World we Want

This book describes the coming sustainable state, should humans decide to step up to their best instincts and preserve the fairness, love of each other and compassion, we all hold in our hearts. The Sustainable State is a Strong State. The values of a Strong State are those of its people. A Strong State is not captured by "special interests" as many are today, either by dynastic families, or entitled elite billionaires, as in the US. The Strong State operates with the good of the people in mind. The book turns on its head the notion of Strong States as militarily strong or strongman strong—those are weak states, Chandran Nair says. The hallmark of a weak failed state resorts to oligarchic power and politics of division to "control" its people. The book is full of examples of States whose policies are working. It is not a doom and gloom book. I recommend it despite the narrator's almost imperceptible breaks in the flow of ideas.
Each chapter begins with a short review of the preceding concepts and concludes with a preview of the next chapter. This helps the reader pick up the book and put it down again with ease. There are many ways we as humans can step into our shared roles, power and purpose to create the Strong State. I say this book is a must read for those interested in people purposed policy. It could be quite helpful to students studying future policy making, to those who want to be in leadership, particularly female, and to those who are currently making policy, who see themselves as agents of change, such as governors and even representatives of governments. The Sustainable State is coming, indeed we can hear her voice already.

The narrator was good. The book is a well argued rejection of the neo-liberal economic model for developing nations. It is realistic and environmentally aware. A good book worth listening to.