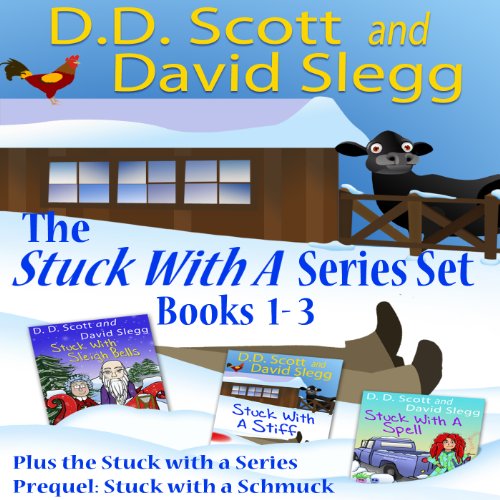 The Stuck with a Series Boxed Set #1

Stuck with a Stiff The Stuck with a Series is Castle and Beckett gone-country with The Mom Squad, Betty Boop and My Cousin Vinny in the barnyard. But this ain't no ordinary barnyard. There's a lot more than a crazy rooster missing from the chicken coop, a bad ass cow causing a bunch of trouble and a dog looking like a creature out of a storybook. There's a stiff too. A stiff - as in a dead guy - in a snow drift near the chicken coop. Things aren't lookin' too good for Nicky Blane, who owns the farm. He's used to creating fictional stiffs for his best-selling novels, not defending himself from being framed for murder.

Stuck with a Spell For Stuck with a Spell - Book 2 in the Series - there's a bit of Bewitched tossed into the mix. Think hex an ex. Nicky Blane, a best-selling author and farmer-in-the-making, doesn't need to look far to find creative inspiration for his novels. His crazy-ass Aunt Liza, a wanna-be witch, lives next door. But this time, she's blown it big-time with a hex on her ex that's gone a wee bit awry. Think graveyards and Voodoo dolls, spell-casting and cauldrons, potions, raw emotions, and more.