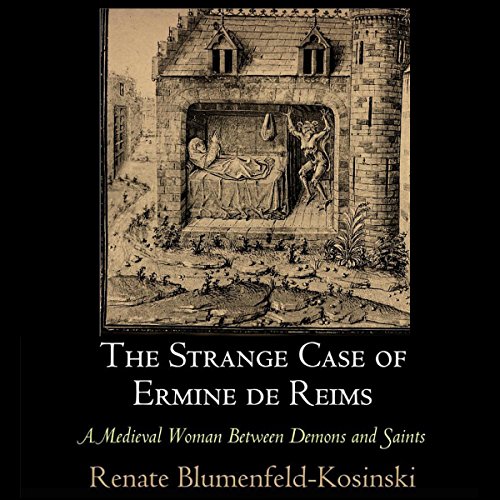 In 1384, a poor and illiterate peasant woman named Ermine moved to the city of Reims with her elderly husband. Her era was troubled by war, plague, and schism within the Catholic Church, and Ermine could easily have slipped unobserved through the cracks of history. After the loss of her husband, however, things took a remarkable but frightening turn. For the last 10 months of her life, Ermine was tormented by nightly visions of angels and demons. In her nocturnal terrors, she was attacked by animals, beaten and kidnapped by devils in disguise, and exposed to carnal spectacles; on other nights, she was blessed by saints, even visited by the Virgin Mary. She confessed these strange occurrences to an Augustinian friar known as Jean le Graveur, who recorded them all in vivid detail.

Was Ermine a saint in the making, an impostor, an incipient witch, or a madwoman? Renate Blumenfeld-Kosinski ponders answers to these questions in the historical and theological context of this troubled woman's experiences. With empathy and acuity, Blumenfeld-Kosinski examines Ermine's life in 14th-century Reims, her relationship with her confessor, her ascetic and devotional practices, and her reported encounters with heavenly and hellish beings. The Strange Case of Ermine de Reims brings to life an episode that helped precipitate one of the major clerical controversies of late medieval Europe, revealing surprising truths about the era's conceptions of piety and possession.

What listeners say about The Strange Case of Ermine de Reims

Riveting and moving story of a medieval visionary

Not all books published by academic presses would lend themselves to the audiobook format, but The Strange Case of Ermine de Reims absolutely does. Renate Blumenfeld-Kosinski has taken a wild and crazy medieval story and has carefully woven it into a series of contexts in such a way that it is easy and pleasurable to follow in audio form.

Ermine de Reims: wow! This pious fourteenth-century widow was plagued by vivid and varied demonic attacks more or less every night for ten months, attacks that her confessor, Jean le Graveur, wrote down. The cast of characters she encounters is mind boggling: saints like the hermit Paul the Simple, Mary Magdalene and St Peter, demons pretending to be saints, sexy demons in low-cut dresses, snakes, toads, burning pigs, and so much more. Ermine's travails are truly moving -- it is impossible not to feel for her. The modern reader is likely to see Ermine through a psychiatric lens, one of the "contexts" that Blumenfeld-Kosinski explores, though she finds richer ground in comparisons with other visionary and ascetic saints of the period both male and female.

We also learn about medieval Reims, where Ermine lived, the Great Schism, the Black Death, the interactions of female mystics and their male confessors, devotional practices, and the discernment of spirits. There are categories and characters that often overlap, but Blumenfeld-Kosinski does a wonderful job of connecting the various appearances of, say, Arnulf of Villers, who performs remarkable feats of asceticism in chapter 3 and is tempted by sexy demons in chapter 4. The author's "signposting" helps the listener to keep them all straight.

Blumenfeld-Kosinski remarks in the introduction that she was moved to tears when she read Ermine's story for the first time. Her empathy shines through this book and draws us in, while her vivid storytelling teaches us to care about Ermine and her fate.

The narration is somewhat less successful. While the narrator, Cynthia Wallace, is a lively enough reader, many of her pronunciations of French phrases and words made this French-speaking listener wince. Someone should have gotten an actual French speaker to help her!