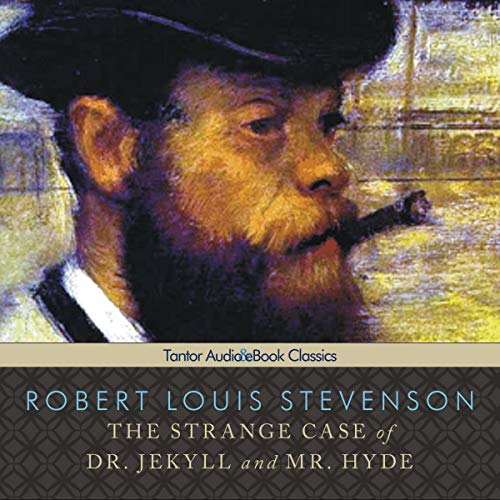 Stevenson's most often dramatized and distorted novella gets its umpteenth audiobook narration from the talented Scott Brick. Although his British accent is a wee bit shaky, he doesn't disappoint. He narrates in his wonted American voice with particular attention to atmosphere and delivers his British characters with personality and a reserve that lends appropriate gravity to the tale and plays effectively against its melodrama.

When a brute of a man tramples an innocent girl, apparently out of spite, two bystanders catch the fellow and force him to pay reparations to the girl's family. The brute's name is Edward Hyde.

A respected lawyer, Utterson, hears this story and begins to unravel the seemingly manic behavior of his best friend, Dr. Henry Jekyll, and his connection with Hyde. Several months earlier, Utterson had drawn up an inexplicable will for the doctor, naming Hyde as his heir in the event that he disappears. Fearing his friend has been blackmailed into this arrangement, Utterson probes deeper into both Jekyll and his unlikely protégé. He is increasingly unnerved at each new revelation.

In a forerunner of psychological dramas to come, Stevenson uses Hyde to show that we are both repulsed by and attracted to the darker side of life, particularly when we can experience it in anonymity.

What listeners say about The Strange Case of Dr. Jekyll & Mr. Hyde

this is a story that I have always enjoyed, and Scott brick is incapable of a bad performance. this is a copy that I would highly recommend to anyone interested in this classic.

I SAW WHAT I SAW

I HEARD WHAT I HEARD
It was hard to keep my mind focused on this. This does not stand up to modern day horror. The many movies that have been made from this, some turning Mr. Hyde into Jack the Ripper, are good movies. If you listen to the last twenty minutes of this, you have the whole book in a nutshell. This book also hits two of my pet peeves. !. Evil people look evil, usually having a deformity and good people are pretty, handsome, tall, petite, etc... 2. Something is so terrible, the writer can't describe it. This was common practice of the time. I thought Brick was good.

A Beautiful Tale of Human Depravity

A beautifuly monstrous tale of human nature. of our desires taking command of our senses. Worst yet, of our lauded logic betraying us for said desires. We are what we repeatedly choose to do; Dr. Jekyll found that out the hard way...

Dracula, Frankenstein and The Strange Case of Dr. Jekyll & Mr. Hyde--these are the great triumvirate of 1800s horror novels. Even though this book is relatively short, it is a masterpiece of literature and a perfect novel for Halloween. The best part of this book is what the author does not write--the author is great about giving just enough information to let the reader's imagination help paint the story. The story is enduring in its quality and cultural impact. The narrator does a fantastic job bringing the story to life.

The narrator did an excellent evil job of getting you in the right mindset of the story.

Nice to listen to

I loved the reader's voice. He gave the story life without over doing it. I enjoyed it.

This has always been a favorite of mine, and I have heard it read by 4 different narrators, but Scott Brick does by far the best job...I don't choose a title based on the reader, but if his is one of several choices of narrator, I always go with his version. I love his voice...

“[E]very time you make a choice you are turning the central part of you, the part of you that chooses, into something a little different than it was before. And taking your life as a whole, with all your innumerable choices, all your life long you are slowly turning this central thing into a heavenly creature or a hellish creature: either into a creature that is in harmony with God, and with other creatures, and with itself, or else into one that is in a state of war and hatred with God, and with its fellow creatures, and with itself. To be the one kind of creature is heaven: that is, it is joy and peace and knowledge and power. To be the other means madness, horror, idiocy, rage, impotence, and eternal loneliness. Each of us at each moment is progressing to the one state of the other.” –C. S. Lewis

Lewis is right, of course. And the sobering truth he expressed in a BBC radio talk during the Second World War had been masterfully illuminated some fifty-odd years earlier in this short fiction by Robert Louis Stevenson. In fact, Stevenson takes it farther. His story reminds us that there comes a point at which choice is no longer possible.

Like you, I read this book many years ago and only bought it because it was offered as a Daily Deal sometime late last spring. As it turns out, Dr. Jekyll and Mr. Hyde is another one of those books which you think you know—until you encounter it again. In the light of a couple decades of experience in the world, Stevenson’s work only gains in stature. I suspect innumerable film treatments have helped to blind us to the terrifying truth that lurks amid all the grease paint and dry ice. But it is still there, accessible to anyone through this well done performance.

Not impressed by the story but the voice actors is very good. Is a short listen and it definitely takes you back to that Era.