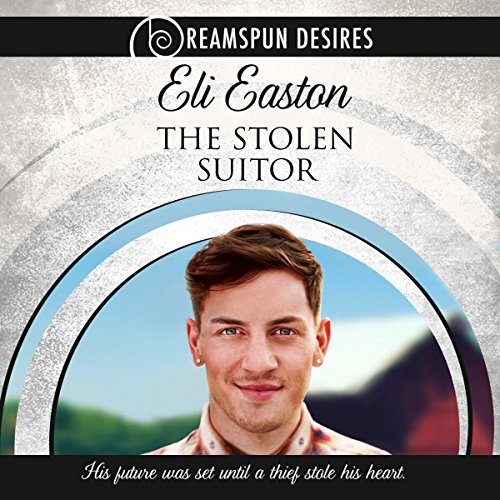 His future was set until a thief stole his heart.

All of Clyde's Corner, Montana, knows local dandy Chris Ramsey will marry Trix Stubben, young widow and heir to the richest ranch in the area. But one woman isn't too keen on the idea. Mabe Crassen wants to get her hands on that ranch, so she sets her older son to court Trix, and her younger son, Jeremy, to distract Chris and lure him astray.

Jeremy Crassen thinks his mother's scheme is crazy. But he wants desperately to go off to college, which Mabe will agree to - if he seduces Chris. How will shy, virginal, secretly gay Jeremy attract Chris, who seems determined to do the right thing and marry Trix? Jeremy can't compete with a rich female widow. Or can he?

What listeners say about The Stolen Suitor

I never really connected to the main characters of Chris and Jeremy. I’ve enjoyed Eli Easton’s writing in the past and that wasn’t my issue here.

Like Karen said in her review the story is soap opera-ish and I normally love those types of stories, but it didn’t work for me here. The setting felt like a step back in time where a widow needed to remarry instead of remaining single for as long as she chose. I think that was because it’s part of the Dreamspun Desires line. This was the first of the line that I’ve read or listened too and think my meh feeling for the book is because the style just isn’t my thing.

If you’re a fan of the Harlequin style of books in the Dreamspun Desires line I wouldn’t hesitate to recommend this book.

I’m not a big fan of Rusty Topsfield as a narrator. It’s not that he’s bad, but his voice doesn’t capture me or pull me in.

What would you do for your mother?

Jeremy and Eric's mom must have lost her mind. She is insisting that Eric quit drinking, smoking and partying and woo Trixie a grieving widow. She also Wants Jeremy to make it easier by stealing Chris, Trixie's best friend and current boyfriend because she thinks he may be gay. Already sounds good doesn;t it... but there are a few secrets to uncover and some near deadly action to toss in to make this an even more intriguing story.

The narration is good. Rusty Topsfield has a calm clear voice and makes the story come to life. He even manages to make Trixie's part cute. And Yes I listened to it all in one day!

If you are looking for a fun romance with some humor, drama, twists and turns, plus a bit of action and drama, and a touch of hot man-sex this is for you. Toss in horses,and an adorable le 4-year-old and it's awesome! I highly recommend it.

^I received a copy for an honest review*

Jeremy’s mother – Mabe – wants Jeremy and his brother Eric to disrupt the “romance” between Chris and Trix so that Eric can win the hand of Trix and inherit the ranch her late husband left her.

Jeremy is to seduce the “obviously” gay Chris even though Jeremy himself is not exactly “out”.

In the end things end up quite differently than anyone planned and through many twists and turns everyone ends up exactly where they need to be with a delightful HEA.

Eli Easton is a terrific writer. She always makes me laugh (and sometimes cry!) with her moving characters. Jeremy is far more than he seems on the surface and though I really, really didn’t want to like anyone in the Crassen family, I ended up loving them all – perhaps the “loser” Eric the best!

I didn’t ever get quite a good handle on Chris, however. He had some bad experiences in college that made him look upon all gay relationships in a bad light and is now determined to settle in to a sexless if not loveless marriage all before he’s even 30!

Trix turns out to be a dark horse in this story. She ends up showing a lot more depth than I originally thought she was going to have and I really ended up rooting for her part of the story more than even Chris and Jeremy!

There were some parts of this story, however, that just didn’t sit well with me. I wanted to see more of Jeremy and Chris together on page than we did and maybe a bit fewer POV shifts. Though I enjoyed Trix and Eric’s story as well as Billy and Mabe, I really wanted to understand Chris more and follow him with Jeremy after the big “drama”.

Janie didn’t ring true to me as four year old, Mabe felt far older than her forty-two years and Chris also seemed far more jaded than his years would account for. Maybe if everyone had been aged a bit more some of their actions would have felt more authentic and age appropriate.

The other thing that really didn’t set well with me was John and how “replaceable” he felt to both Billy and Trix.

I still cried when Billy was out searching for Janie and that tells me the story was well written even though the shift was to a different set of character.

Rusty Topsfield is a narrator that I usually really enjoy. He’s easy to listen to, and has a good sense for emotion and pacing. He uses a heavy “country” accent for this story and for the most part it works. Sometimes it got a bit tedious and overdone, but it’s hard to know if that was him or the story. I didn’t care for his female characters much, especially Janie – the little girl – but I enjoyed Jeremy and his brother a lot. All in all I think this is a good way to experience this book.

it is so worth it you will not be disappointed

I really loved this story which was so well written. I loved the characters, I love Eli who writes with so much heart.

Ok but not memorable

I probably would have enjoyed this book if I had read it - the story was entertaining enough and I usually like Eli Easton's books. The narrator spoiled it for me though - he was acceptable with the ongoing narrative but his voices and accents were really awful.

If I hadn't just returned another book I would have returned this one after the first half hour. I certainly won't listen to it again, and it became more a task to finish it than something I looked forward to. As I said, the story was a good one, and I just wish I'd bought the kindle version instead of the audiobook.