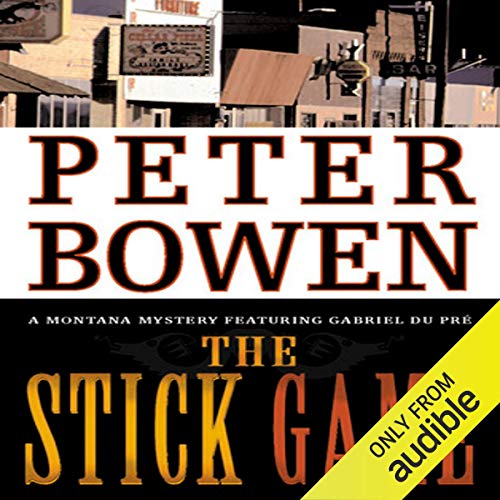 Something is rotten in the Fort Belknap Reservation. Life has always been tough on this barren stretch just south of the Canadian border, but now the children are dying. While playing his fiddle in a reservation bar, part-time deputy Gabriel Du Pré meets an accordionist who suspects that the children’s health defects and low test scores are connected to the nearby Persephone mine.

Meanwhile, Du Pré investigates the disappearance of one of the afflicted children. When the boy turns up dead, the accordionist’s theory gains credence. It wouldn’t be the first time that the rich men of Montana found wealth at the expense of the reservation’s children.

What listeners say about The Stick Game

This story is even more relevant now

Jim Meskimen is steadily improving his narration skills as he works through the series. He is still not as versatile in character voicing as Christopher Lane, but he's trying. The pronounciation issues that were noticeable in "Specimen Song" are much better now, and Toussaint is now Too-sont, as it should be. He does have trouble with Belknap, which is more like Bell-nap, not Belk-nap. Benetsee has developed a good voice now.

I think of the Gabriel Du Pre' series as one long book. I listen to them over and over, not out of an interest in solving the mystery, but just as a visit in Montana with some people I like ver' much, and wish there were more books.

"The Stick Game" refers to an Indian gambling game, and one of Madeleine's cousins is very good at it. She's battling alcoholism, and her kids have their own problems. One is a deaf mute, but runs the household while her mother is off on her alcoholic tears. There are two brothers, one who is mostly okay, but one is having trouble...and he's missing.

Du Pre' searches for the lost boy as a courtesy, but he pretty much knows what he'll find out there in the sweetgrass country. A chat with the lad's friends takes him to a favorite hideout of the kids, and a rank odor leads him the rest of the way, where a rotting corpse dangles from a rope in an old well. The despairing boy had left a suicide note.

The spring in the hiding place is poison, no wildlife in it, plants all dead, and these kids have ben drinking from it. The survivors tell Du Pre' that Danny was slow but not too bad until a few years ago, when he suddenly couldn't concentrate. It was getting worse and worse, until Danny couldn't take it any more.

What's in that water? It's almost certainly a polluted source from a big gold mine in the area, but supposedly everything that mine does is clean and legal. Paperwork's right.

While Du Pre' asks questions, he and his friends make music at the bars. Them Turtle Mountain boys, Bassman and Talley, play them some good music, goes nice with his fiddle. Talley has suffered since he was born with spina bifida or something similar, leaving him with an open wound in his lower spine. When Bart learns of the man's condition, he promptly sends Talley to the Mayo Clinic for help. Got to help a good musician any way you can.

You need to read/listen to these books in order, as they grow on the previous events. You can read them as stand-alones, but you're going to miss about thirty percent of what's going on because you don't know the backstory.

By far my favorite so far of the series

I laughed hard, Piney & Norris were by far the most lively characters of the series so far.

these are stand-alone books but I would read them from the beginning you'll get much more out of the book if you do the characters are inter woven in each book and develop in each book it's like their lives and you see a little glimpse of it and the books are interconnected in that way.

Loved this book. I wish this series could be made into a production with the music included. I can almost hear it. These books have such powerful themes but also characters that are real, compassionate, passionate and funny. I love that there isn’t the level of violence that other mystery series seem to feel they need to include.