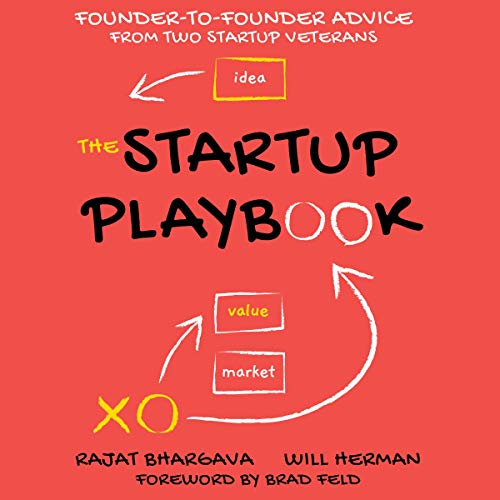 By: Rajat Bhargava, Will Herman
Narrated by: Gary Tiedemann

Get the real guidance you need to create and build your first start-up company from founders who have been there many times before.

We make no bones about our bias. We're on your side, the founder's side. While venture capitalists, investors, and accelerators/incubators can add great value in the start-up ecosystem, this book isn't about their points of view. We'll tell you where our interests as founders diverge from those on the other side of the table - investors, bankers, advisors, board members, and others - and what to do when that happens.

The Startup Playbook is not a recipe, it's not a template, it's not a list of tasks to do. It's our insider's guide to starting a company and running it successfully in those critical early months. Between us, we've started more than a dozen high-tech software companies and raised more than $500 million in investment capital. We've acquired more than 35 companies, had three of our start-ups go public, sold six of them, and we made billions of dollars for shareholders. We've also invested in more than 80 start-ups, advised and mentored more than 200 companies, and worked with venture capitalists (VCs), incubators, and accelerators to help launch many other new start-ups. We've had plenty of failures, too. And we've probably learned more from those than from the successes. We share those lessons as well.

What listeners say about The Startup Playbook (2nd Edition)

I got so much out of this book. great information, clearly delivered in a way that makes sense and in a practical way. I'll definitely be listening to this book again at different times as my startup journey continues!