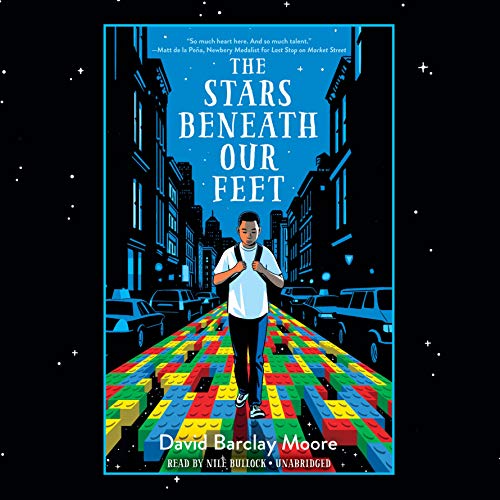 The Stars Beneath Our Feet

“The right story at the right time.... It’s not just a narrative; it’s an experience. It’s the novel we’ve been waiting for.” (The New York Times)

A boy tries to steer a safe path through the projects in Harlem in the wake of his brother’s death in this outstanding debut novel that celebrates community and creativity. Winner of the Coretta Scott King John Steptoe Award for New Talent and soon to be a major motion picture directed by Michael B. Jordan!

It’s Christmas Eve in Harlem, but 12-year-old Lolly Rachpaul and his mom aren’t celebrating. They’re still reeling from his older brother’s death in a gang-related shooting just a few months earlier. Then Lolly’s mother’s girlfriend brings him a gift that will change everything: two enormous bags filled with Legos. Lolly’s always loved Legos, and he prides himself on following the kit instructions exactly. Now, faced with a pile of building blocks and no instructions, Lolly must find his own way forward.

His path isn’t clear - and the pressure to join a “crew,” as his brother did, is always there. When Lolly and his friend are beaten up and robbed, joining a crew almost seems like the safe choice. But building a fantastical Lego city at the community center provides Lolly with an escape - and an unexpected bridge back to the world.

David Barclay Moore paints a powerful portrait of a boy teetering on the edge - of adolescence, of grief, of violence - and shows how Lolly’s inventive spirit helps him build a life with firm foundations and open doors.

“A fast and furious read in which we meet some amazing people, people that stay with us. David Barclay Moore is an exciting new voice. We definitely haven’t heard the last of his brilliance.” (Jacqueline Woodson, Newbery Honor and National Book Award-winning author of Brown Girl Dreaming)

“The Stars Beneath Our Feet is about the weight of the world on the back of a child, and the creative tools necessary to alleviate that pressure. I found myself rooting for Lolly, and you will too.” (Jason Reynolds, Coretta Scott King Honor Winner for As Brave As You)

"A debut that serves as a powerful instructive for writing from and reading the intersections - 125th Street-size intersections for all readers to enjoy." ( Kirkus Reviews)
"Debut author Moore delivers a realistic and at times brutal portrait of life for young people of color who are living on the edge of poverty. At the same time, Moore infuses the story with hope and aspiration, giving Lolly the chance to find salvation through creativity." ( Publishers Weekly)

What listeners say about The Stars Beneath Our Feet

My 7th graders enjoyed it!

I used this book with my 7th grade class. Our discussions were lively and personal.

This book should be a part of the NYC school reading list. It is culturally relevant to many young men and women growing up in the inner cities of NYC and across the U.S

I listened to this book and my 13yo daughter read it. Yes, it is more appropriate for the YA age group. However, having worked in inner city schools and with kids exactly like this, it is their reality. The violence, language and life challenges are real. Those kids see this every single day, it doesn't wait for when they are old enough to deal with it. There are reviews about the N word, of course we know this is not to be used, but come on people, the kids use it all the time. The content in this book is real life for so many. Instead of shying away from it, let us get uncomfortable and raise questions with our kids, help them work through these tough issues.

This book has a beautiful story of choosing your own path, not just going with the norms. It addresses tough subjects, some of which are not brought up in other books of the same theme. The idea that adults make bad decisions and they can apologize, that kids can find a new way, that friendships can help bridge new hope. This book is wonderful. Beautiful story of friendship and learning to accept the person you can actually be when you go for it! Bravo!

I felt like the narrator was actually lolly and that help me with the story. I finished this book in one day because I couldnt stop listening. the chapters are short but pack in a lot of ways to make you laugh, cry, and mad. highly recommend

its was great u have to read...or listen? to it to understand. too good to just say in words