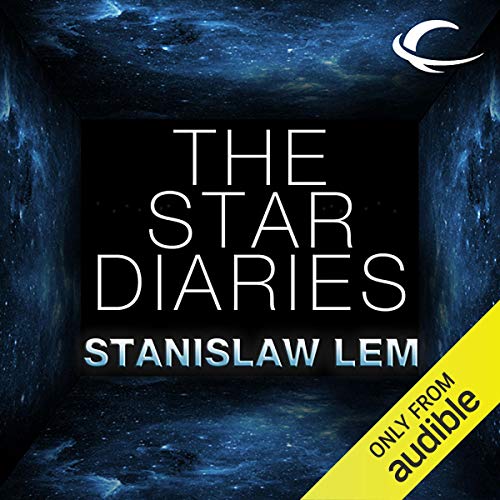 This collection of short stories centers around one character, space traveller Ijon Tichy. In these stories, Stanislaw Lem's "Candide of the Cosmos" encounters bizarre civilizations and creatures in space that serve to satirize science, the rational mind, theology, and other icons of human pride.

What listeners say about The Star Diaries

Not long ago I read Ursula K. LeGuin’s The Lathe of Heaven, and it disappointed me, among other reasons, because it put so much weight on the “science” half of science-fiction. I felt as if throughout the novel, she was trying to appease the doubters, the critics who question whether ‘speculative literature’ ever has a claim to be taken seriously.

Lem is doing the exact opposite. His space hero, Ijon Tichy, is a goofy stand-in for the free play of imagination. He’s a space explorer who, using technology as ever-changing as the campy Batman of the 1960s, ventures on one silly adventure after another.

The first of the adventures should be more than enough to hook anyone. Tichy is flying through a distant galaxy when he discovers that the equivalent of his space-rudder has jammed. He then finds that, to fix it, he will need a second pair of hands, one to hold the item in place and the other to tighten the wrench. Alone, and in despair, he takes a nap only to be awakened by himself – a version of himself from the future a day in advance. It turns out (with the sort of vague reference to science that LeGuin would have found beneath her) that his ship is approaching the speed of light as it nears a star, and that has put him into a time loop.

Lem might have left us to wonder at his cleverness, but he takes things much further. Tichy at first refuses to trust his future self. Then, when later opportunities arise, he constantly frustrates his efforts to fix the space ship. He gets into fights, ambushes himself, anticipates what he will soon want to do but guesses wrong, and finally forms a kind of parliament of all his future selves on the ship.

Silly as such a story is, though, it’s simultaneously allegorical in at least two dimensions.

The dimension that’s more readily accessible is biting. At the same time as the entire book is a celebration of the capacity of the human imagination (certainly as Lem exercises it), it’s a critique of our capacity to work together to solve our problems. The perpetual bete noir here is bureaucracy, the lumbering ways in which we attempt to order our mutual efforts. The second story for instance, has Tichy appointed as Earth’s delegate to an interstellar association of civilizations. When he arrives, though, the association has to go through a lengthy deliberative process, demanding reports on Earth’s good conduct.

That’s a consistent concern throughout the stories, and it’s easy to imagine Lem drew on frustration with the communism of his Polish childhood. Funny as the perpetual insight is – bureaucracy kills the spirit that makes us human – it clearly has an edge.

The other dimension of allegory here grows out of that notion, but – as I read this 40 years later and a continent away – I’m conscious of missing much of the historical, political, and social import. I sense it, but I feel a little as if I’m hearing someone else’s inside jokes. Even through translation, I recognize the rhythm of a master joke-teller, but I find myself a beat slow. I am aware, always, that this is coming to me second-hand, that I am watching the man perform and then pausing to read the subtitles before I can fully laugh.

You get some wonderful details here – aliens that our dim-witted Tichy mistakes for vending machines, or potatoes that, adrift in space, become predatory and rapacious – but I did find some of the later stories running together. Maybe because I was missing some of the barbs at the ends of the hooks Lem throws out there, I felt as if I’d gotten the best of this before it was over.

Still, I recognize a deep cleverness here. Aware that there are parts of this out of my reach without footnotes, I still enjoy it. This is science fiction as it was first born, as Gulliver’s Travels first showed it can be, and that – even before its other virtues – makes me recommend it.

There is no 24th voyage, which IMHO, is the best and the most intimidating of them.

Story of a space-traveling Candide

One of the most entertaining and insightful satires written in any genre. I've read only maybe half a dozen books that made me LOL and this one is one of them. I read it some thirty years ago and much of the satire was lost on me but know in my late fifties I can appreciate every reference. Very good translation which is a feat in case of Lem's satirical writing because it relies heavily on made up names and words. The subject matter, the human condition, is universal. I love how he ignores the details that so many writers are overthinking and give their books pedantic and overworked quality. If there was ever a movie made I would see it done in a steampunk fashion. I recommend this book to older readers who enjoy deadpan humor delivery and lived long enough to need a less than serious approach to our human foibles.

I would recommend this to anyone that loves science. Hitchhikers guide to the galaxy is the best comparison. However, Lem wrote this before Adams wrote his book. The book is funny, clever and takes little bit of scientific understanding to appreciate. I would recommend this to adults not kids because kids probably won't find it as funny. Overall, this is a great book it's very silly and clever.

Many reviewers don't seem to realize this was first published in 1957 and the idea are very prescient. Stanislaw Lem was a polymath with excellent credentials in science and its philosophies. He managed to combine science fiction themes with the humor of folk fables. This is not "Douglas Adams meets anybody". You will find little in the way of snappy dialog. It is the IDEAS that are funny and the matter-of-fact way Ijon Tichy deals with highly unlikely problems in space and time travel. His roots are more in Baron von Munchhausen's wild stories.

I must say the performance was marred by the unfortunate hilarity of the reader pronouncing "ennui" as though he were pronouncing the alphabet letters "N" "U" "E". He also gets stuck in a monotone in some of the longer philosophical passages which is a problem with idea-laden exposition.

A firework of ideas and fictional realities. David Marantz read the diaries of this extraordinary traveler Ion Tichy in a very convincing manner. St. Lem balanced and decorated the many philosophical aspects
with hyper-Cosmic humour. We are lucky that the man of many journeys didn't loose it due to the many severe challenges he had to face!

Great book and an excellent audiobook!

I have been a huge fan of Stanislaw Lem for most of my adult life and only wish I had been introduced to his body of work at a younger age. That being said I thoroughly enjoyed this audiobook and had no problem listening to it all the way through, enthralled by his mastery of the genre of science fiction. The performance was flawless and I highly recommend this to anyone young or old. Even those who have no love for science fiction may find themselves drawn into these richly humorous adventures of a hapless human wandering the cosmos armed only with his quick wit and a pen knife. I only hope this helps others to find the works of the author who wrote many other excellent books such as the Cyberiad which is another favorite of mine. If you're on the fence just pull the trigger, you won't regret it.

Think Douglass Adams meets Frank Herbert! Fun sci-fi with a classic flavor mixed with more modern scientific notes... A wild ride in a Hitchhiker's Guide kind of universe, with very deep and thoughtful bits thrown in, all served in easy little short stories! An enjoyable time through and through..

This book is a true masterpiece. Lem was, beyond any doubt, the best sci-fi writer of all time

Started good. Kinda Douglas Adams-esque scifi parody, but got pretty repetitive.
And it is full of pseudo-scientific jargon that is at first amusing (again, a la Adams) but at a certain point just makes it really hard to follow.

Makes one think, laugh, and imagine...

It was an unexpected book, but maybe this was so because I am not as yet very familiar with Lem's works, just his popularity. It made me think of Gulliver and his travels, who by a series of encounters recalibrates his thoughs on human nature, leading him to despondency and alienation. Tichy is different in that he is terribly good-natured and not easily perturbed by what he discovers in space, time and the character of himself or other species, perhaps leaving the audience to carry the thought further. Richly imaginative, and highly recommended.