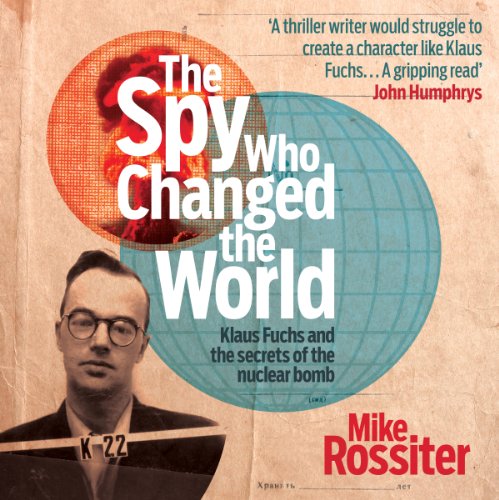 The Spy Who Changed the World

The gripping true story of Klaus Fuchs: the spy who sold the nuclear secrets to the Russians.

When the three leaders of the victorious allies, Britain, the United States, and the Soviet Union, met at Potsdam in July 1945, President Truman announced to Stalin that the US had a new and devastating weapon. Observers report that Stalin paid no attention to this remark. In fact, Stalin was well aware of the existence of the atomic bomb, and the Soviet Union was rapidly developing its own.

Stalin owed his knowledge to the atomic scientist Dr Klaus Fuchs, who can lay claim to being the most successful spy in history. A refugee from Nazi Germany, entrusted with crucial work at the very heart of the British and American nuclear weapons project, Fuchs gave every piece of information he had to the KGB, the Russian intelligence agency. Then in 1950, his spy mission complete, he made an unprompted confession to MI6.

His espionage accelerated the start of the Cold War between Russia and the West, and caused a split between the US and British governments that forced Britain to build its own atomic weapons. The world that Fuchs helped create remained in the grip of a nuclear stand-off for a generation.

The Spy Who Changed the World uses previously unseen archive documents to bring to life one of the most compelling spy stories on the 20th century.

What listeners say about The Spy Who Changed the World

Would you consider the audio edition of The Spy Who Changed the World to be better than the print version?

Well read, good story and you really want to keep listening when the time to listen runs out. I sat in my car a couple of times to listen to the end of chapter. the book doesnt get bogged down with the technical details of spying, rather it focuses on the story. Really enjoyed it.

For once a book title making bold claims can not be described as hyperbole. Fuchs was a key player in developing the atomic bomb for the US and in ensuring that both the Soviet Union and UK were also able to develop a nuclear capability. Without Fuchs the U.S. and USSR would still , in the first case definitely and in the latter probably, developed the weapon, though not so quickly. Without Fuchs input it is unlikely that the UK could have done so. This is a fascinating tale, the central character remaining, even after you finish reading, an enigma.

I confess I initially worried that it might be a bit of John Le Carré meets Einstein but not a bit of it. A fascinating personal story and highly recommended.