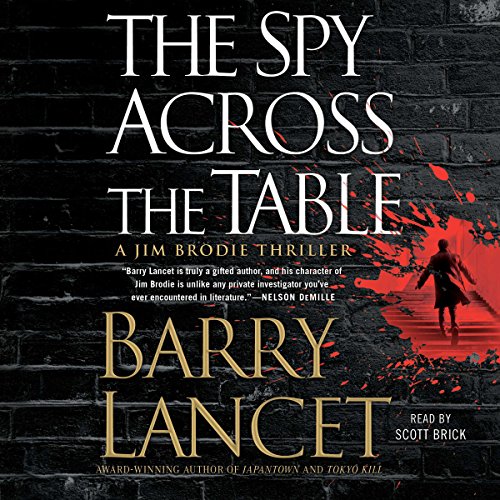 The Spy Across the Table

In this exciting international thriller featuring Japanese antiques art dealer and PI Jim Brodie, a double murder at the Kennedy Center forces Brodie into a dangerous game of espionage - putting him in the crosshairs of the Chinese, North Korean, and American governments.

Jim Brodie is an antiques dealer, Japan expert, and second-generation private investigator. When two theater friends are murdered backstage at a Kennedy Center performance in Washington, DC, he's devastated - and determined to hunt down the killer. He's not the only one.

After the attack Brodie is summoned to the White House. The first lady was the college roommate of one of the victims, and she enlists Brodie - off the books - to use his Japanese connections to track down the assassin. Homeland Security head Tom Swelley is furious that the White House is meddling and wants Brodie off the case. Why? For the same reason a master Chinese spy known only as Zhou, one of the most dangerous men alive, appears on the scene: Those murders were no random act of violence.

Brodie flies to Tokyo to attend the second of two funerals, and his friend's daughter, Anna, is kidnapped during the ceremony. It is then Brodie realizes that the murders were simply bait to draw her out of hiding. Anna, it seems, is the key architect of a top-secret NSA program that gathers the personal secrets of America's most influential leaders. Secrets so damaging that North Korea and China will stop at nothing to get them.

Publishers Weekly said, "Readers will want to see more of the talented Jim Brodie", and The Spy Across the Table is an edge-of-your-seat thriller in Barry Lancet's wildly popular and highly acclaimed series.

What listeners say about The Spy Across the Table

I thoroughly enjoyed this book and did not want it to end! This is the 4th book in the Jim Brodie series. I don't think it really matters if they are read in order as each book is a stand alone mystery, the author gives some background to relationships in each book.
This book begins with Brodie introducing his friend and college roommate to a Japanese friend, they are both murdered and Brodie feels extremely guilty. In The meanwhile the First Lady of the US contacts him as his other person killer used to be her roommate in college. Following the murders Brodie goes to Japan for his friend's funeral and the woman's daughter is kidnapped during the service.
Here begins a wild espionage story that will keep you not only interested but on the edge of your seat wanting to know more. Traveling through Japan, China and N. Korea Brodie doesn't know who to trust. Even with the President and First Lady assisting from the states Brodie still manages to get himself kidnapped while trying to rescue his deceased friend's daughter. He is tortured for information and scheduled for execution... I have to end my commentary there or ruin this excellent book for someone else.
The end was kind of sad and I'm not sure if it will be a lead into the next book or (?).
Scott Brick does a phenomenal job narrating.
This book is HIGHLY RECOMMENDED.
If you found this review helpful please indicate so.
Thank You.

Japan Town was my first and this book my second, what a Great book and of course Scott Brick makes it Super. I usually follow Scott Brick, because He only narrates the best books that I Enjoy!

There is really not much story beyond the hero being tortured and betrayed. No misery or much detective work.

Realism it ain't, but worth a listen

Combine author Barry Lancet's long-winded, angsty, over-used situation recaps with "performer" Scott Brick's apparently uncorrectable bent for over-dramatization, and you get an audiobook with multiple sections that just beg for a fast-forward skip-through.

Brick has reigned it in very significantly over the past decade, but it seems he still just can't resist hamming it up when things get angsty. He does an exemplary job otherwise, and doesn't mangle the Japanese. Much.

Lancet's Asia insights (+product placements) are a nice treat, by-and -large, and are sorted out very nicely, fact from fiction, in a section that's read after the story itself ends. The author's treatment of police & military tactics and language, however, is comic-book laughable. So is his presentation of clandestine service tradecraft, technology and process, but such details are just more fiction here. If you're looking for realism in those kinds of details, look elsewhere. The Lancet-written personalities of yakuza members also tend to be manga-flat caricatures. Don't get me wrong, I don't doubt that it's all good Hollywood material.

For my tastes, the author way overdid it with the serial beatings, the serial torture sessions, and the serial tough-guy-can-still-kick-some-ass survival of such brutal episodes.

It's worth a read, or a listen.

Having about 750 audiobooks behind me I hadn’t listened to anything from this author before, and I thought I was taking a chance with this. Hardly! What a great story! I will be listening to everything he’s got available now. And, I have to say that this time Scott Brick did an over the top amazing job! He’s always good at worst and typically very good, but for some reason this time he really made you FEEL the character, he brought Brodie to life perfectly. I had at times forgot that it was Mr. Brick speaking and not Mr. Brodie. Outstanding on all counts, and thank you for a great time to both author and narrator!

The author delivers a riveting plot of intrigue,
corruption, deception and power that is entirely real to life especially about the brutality and human indignities of 2 Communist nations—China and North Korea. You can’t stop listening because Scott Brick sets another “gold standard” performance that will knock your socks off!

Have been a big fan until this one.

A little hard to believe

I have enjoyed the other two books immensely and this book up to the point where he was captured and the events that ensue after. Not believable, IMHO, for Jim, regardless how much of a bad ass he is.

great book smart interesting great have to get the

the book is smart 1thoughtful and smart. you got to get4 stars great narration Scott brick great

Not my author not my narrator not my story just too long and unbelievable. Quit listening with four hours to go.