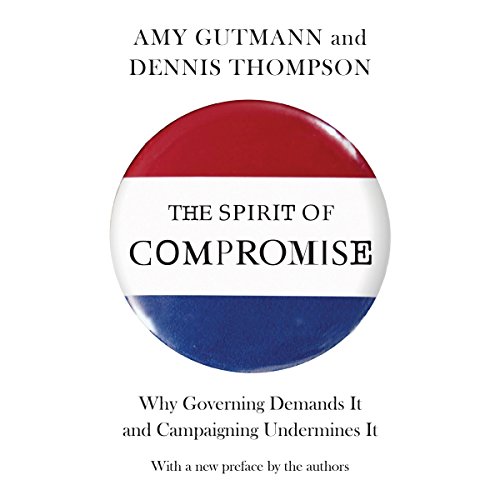 The Spirit of Compromise

If politics is the art of the possible, then compromise is the artistry of democracy. Unless one partisan ideology holds sway over all branches of government, compromise is necessary to govern for the benefit of all citizens. A rejection of compromise biases politics in favor of the status quo, even when the rejection risks crisis. Why then is compromise so difficult in American politics today?

In The Spirit of Compromise, eminent political thinkers Amy Gutmann and Dennis Thompson connect the rejection of compromise to the domination of campaigning over governing - the permanent campaign - in American democracy today. They show that campaigning for political office calls for a mindset that blocks compromise - standing tenaciously on principle to mobilize voters and mistrusting opponents in order to defeat them. Good government calls for an opposite cluster of attitudes and arguments - the compromising mindset - that inclines politicians to adjust their principles and to respect their opponents. It is a mindset that helps politicians appreciate and take advantage of opportunities for desirable compromise.

Gutmann and Thompson explore the dynamics of these mindsets by comparing the historic compromises on tax reform under President Reagan in 1986 and health care reform under President Obama in 2010. Both compromises were difficult to deliver but only tax reform was bipartisan. Drawing lessons from these and other important compromises - and failures to compromise - in American politics, Gutmann and Thompson propose changes in our political institutions, processes, and mindsets that would encourage a better balance between campaigning and governing.

Calling for greater cooperation in contemporary politics, The Spirit of Compromise will interest all who care about whether their government leaders can work together.

What listeners say about The Spirit of Compromise