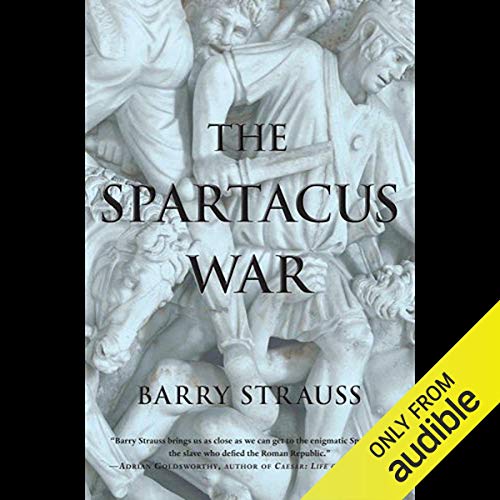 The Spartacus War is the extraordinary story of the most famous slave rebellion in the ancient world, the fascinating true story behind a legend that has been the inspiration for novelists, filmmakers, and revolutionaries for 2,000 years.

Starting with only 74 men, a gladiator named Spartacus incited a rebellion that threatened Rome itself. With his fellow gladiators, Spartacus built an army of 60,000 soldiers and controlled the southern Italian countryside. A charismatic leader, he used religion to win support. An ex-soldier in the Roman army, Spartacus excelled in combat. He defeated nine Roman armies and kept Rome at bay for two years before he was defeated. After his final battle, 6,000 of his followers were captured and crucified along Rome's main southern highway.

The Spartacus War is the dramatic and factual account of one of history's great rebellions. Spartacus was beaten by a Roman general, Crassus, who had learned how to defeat an insurgency. But the rebels were partly to blame for their failure. Their army was large and often undisciplined; the many ethnic groups within it frequently quarreled over leadership. No single leader, not even Spartacus, could keep them all in line. And when faced with a choice between escaping to freedom and looting, the rebels chose wealth over liberty, risking an eventual confrontation with Rome's most powerful forces. The result of years of research, The Spartacus War is based not only on written documents but also on archaeological evidence, historical reconstruction, and the author's extensive travels in the Italian countryside that Spartacus once conquered.

"Strauss admits the lack of reliable primary sources has forced him to engage in some tricky conjectures regarding the character and motivation of Spartacus. Still, many of his assertions are credible, and his efforts to portray the political and social milieu of Italy during the late Republic are superbly done. Strauss sees Spartacus as a brave and charismatic leader who was limited by some personal shortcomings." ( Booklist)

What listeners say about The Spartacus War

This is a story of the gladiator, Spartacus. He was brought from Thrace (Bulgaria) to fight in an area in the shadow of Mt. Vesuvius. In about 73 to 71 B.C. Spartacus and seventy other gladiators broke out armed with kitchen utensils. For two years he led a growing band of runaway slaves in a revolt. Strauss points out that Spartacus was a Murmillo gladiator who had served as a Thracian auxiliary to the Roman Army where he learned Roman military tactics.

Strauss is a Professor of Classics at Cornell University. Strauss has a fine balance between accessibility and scholarship, imagination and responsibility. It is not always an easy balance to strike but Strauss did a good job. The book reads like a thriller but grounded in history. Strauss wove history into an exciting story.

The author points out that the goal of the rebellion was vengeance not to abolish slavery. Strauss stresses that Spartacus had exceptional principles and he liked the idea of equality. Spartacus died charging the Roman general Crassus who led the campaign against him.

Strauss has not only created a history of the slave war but a campanian travelogue. The book was well written and easy to read for a history book. Roy Grover narrated the book.

a good clear overall of the famous events

the facts are well separate from legend and Assumption. even fans of the Stars over sexy and violent Spartacus will find this overall fact from truth interesting. i was surprise how much..( and who) was really part of history. so much isn't known but i felt i got a proper understanding of there war of the damned. only thing i wondered about was the author was very sure he was a Thraicin .. i had always heard we couldn't be sure.
also don't remember any issue with reader.. so i guess it was fine

The narrator does not know how to pronounce anything, was there nobody double checking him?!?! Pompey and Pompeii are different words!!!

Good clear narration, BUT when while Audible voice actors take the time to learn the proper pronounceation of names and places!

One of the better books about history!

Would you listen to The Spartacus War again? Why?

It wasn't that kind of book, but the constant review of the Leadership styles made this book a non-stop listen...

Which character – as performed by Ray Grover – was your favorite?

Not really a character driven book, but even knowing Rome wins the writer makes you wish they had not! The voice is so smooth you become lost in the writing.

This is that rare book that's read AFTER seeing the Starz TV series!

Buy this book even if you HATE history as a subject and crack a beer...

But the only significant flaw I noticed was in the performance: riddled with bad pronunciation. Good read otherwise I thought

I was intrigued by the story of Spartacus. The book is a little dry but usually these types of books are. I truly love the fact the author didn't insert his opinions as fact. he states sources and probabilities in cases where some factual information has been lost. If you love history in general you will enjoy this book. If you love ancient Rome it is a must read.

I got the book because I loved the tv series and the book does a great job of delving into actual history, even when a lot of the history is unknown. Narration was good, but could get a little dry. Good pick up for any history buffs.

Detailed and interesting throughout

I really like the way this author inserts points of clarification. For example, when naming ancient cities he uses both the ancient and modern name. His attention to accuracy is beautiful. The "you are there" style is engaging and you won't want to put it down. The reader too, does a wonderful job conveying the story.

shameful performance of a good, not great, book

Let me start by saying that the book is fairly good, mostly accurate telling of the story. I think it would be fair to criticize the author for over reliance on narrative here, because it's a strange story to try to tell as a narrative. More details on the archaeology and less on basic romanism would probably have helped the story along. Who reads a book on the Spartacus war that doesn't already know most of the basics of Roman military organization?

The real problem here is the pathetic reading. Could Ray Grover have any less idea how to pronounce Latin names and phrases? It was absolutely offensive. It is obvious Mr Grover has not even seen the movie Spartacus, as it could have saved him the embarrassment of saying Pompey wrong hundreds of times. The production of this audiobook is the worst I've heard yet.

I'm dead serious when I ask audible to reach out to me for an interview to redo this recording.

Will the real Spartacus please stand...

This book freely admits that the evidence for the Spartacus war is thin on the ground and often contradictory, so if you only wanted to stick to known facts than you could barely fill a pamphlet. As it turns out 6+ hours is a pretty good length as the author does much to flesh out the facts with a good background of the period and a number of suppositions which may or may not be true but help to keep the story going. I can't vouch for the authenticity, but the book does well in telling the story and describing the world in which it occurred.

I found the American accent of the narrator jarring at first, but he reads well enough. The repeated insertion of modern names for ancient places is quite annoying, particularly when they are little different, but anyone interested in the Republican Roman world will enjoy this book.