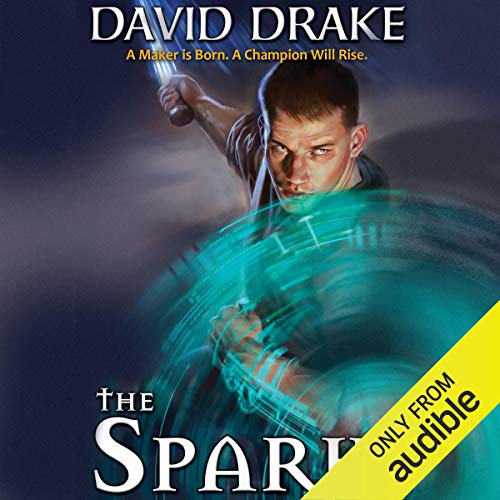 In the time of the Ancients the universe was united - but that was so far in the past that not even memory remains, only the broken artifacts that a few Makers can reshape into their original uses. What survives is shattered into enclaves - some tiny, some ruined, some wild.

Into the gaps between settlements, and onto the road that connects all human reality and the reality that is not human and may never have been human, have crept monsters. Some creatures are men, twisted into inhuman evil; some of them are alien to Mankind - and there are things which are hostile to all life, things which will raven and kill until they are stopped.

A Leader has risen, welding the scattered human settlements together in peace and safety and smashing the enemies of order with an iron fist. In his capital, Dun Add, the Leader provides law and justice. In the universe beyond, his Champions advance - and enforce - the return of civilization.

Pal, a youth from the sticks, has come to Dun Add to become a Champion. Pal is a bit of a Maker, and in his rural home he's been able to think of himself as a warrior because he can wield the weapons of the Ancient civilization.

Pal has no idea of what he's really getting into in Dun Add. On the other hand, the Leader and Dun Add have no real idea of what might be inside this hayseed with high hopes.

The Spark: A story of hope and violence and courage. And, especially, a story of determination.

David Drake was attending Duke University Law School when he was drafted. He served the next two years in the Army, spending 1970 as an enlisted interrogator with the 11th Armored Cavalry in Vietnam and Cambodia. Upon return he completed his law degree at Duke and was for eight years Assistant Town Attorney for Chapel Hill, North Carolina. He has been a full-time freelance writer since 1981. His books include the genre-defining and best-selling Hammer's Slammers series, the nationally best-selling RCN series including In the Stormy Red Sky, The Road of Danger, The Sea Without a Shore, and Death's Bright Day.

What listeners say about The Spark

David's new universe is as different from his Hammer's Slammers universe as night and day. It has a medieval society in a post apocalyptic universe (no zombies thank goodness) without "The Church" & ignorant superstitions. You have to read it & let Pal guide you through it.
It could be a "stand alone" story, but you will definitely want more - I do!

Quite enjoyable, but was a little bummed by the continously victorious MC. Other than that it was an enjoyable listen, though if more of the series was written, I am not sure if I would buy them.

Good description of fights and with and interesting idea for weapons. The characters are well rounded with the normal collection of imperfections. This makes them much more believable and easy to care about.

A tightly plotted and very engaging first novel well worth your time. The performer is imaginative and resourceful. I wholeheartedly recommend it.

Bravo! A most enthralling and engagingly enjoyable read. Note: Author page links need an edit. This, and many other of your books, claim to not be available when individual series/books are. I even own many already! Take care and embrace your stories ;-))

At its core this is a good book. Loved the world. But lack of character development really hurt the main character.

David Drake is an exceptional science fiction writer however his fantasy works are even better. This is worthy of reading.

loved it. love all drake books. ripping yarn from a worthy author. can't wait for next book.

I've always enjoyed his series, David Drake has never disappointed me. This story, with new characters and a new milieu matches his best works!
The narration was excellent, and David Cronin is definitely worthy of the material.

The beginning of the story is intriguing, however, I started to care less and less for the world, the people. The book has a heavy slant towards male machoism and medieval justice system.

I can't recommend this book....however, the author has some talent...just poorly focused. Maybe the next series.