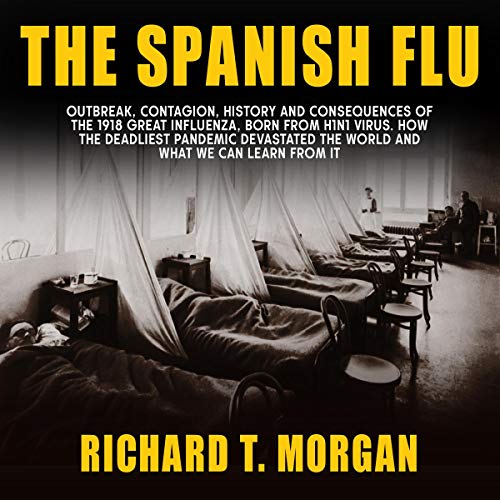 History of and lessons from the Spanish flu to make the best of the current new pandemic virus crisis.

Are you curious to learn of the Spanish flu that occurred more than 100 years ago? Are you looking for a book that will detail the history of the Spanish flu, including how it spread and how the world reacted as a result? Would you be interested in getting a better idea on what you can do to prepare during a pandemic? Would you like to get a guide that would teach you to be safe during the current new pandemic virus situation and make the best of it?

If you answered “yes” to any of these questions, keep reading.

The Spanish flu was the worst pandemic the world has ever seen, next to the bubonic plague of 1346. About 500 million people were infected by it, and between 25-50 million lost their lives. It occurred toward the end of the First World War which lasted between 1918-1920, and in the United States alone, there were around 675,000 deaths recorded. This book revisits the Spanish flu in a unique way, starting with a brief scientific explanation of the virus and then going deeper to explore its historical context.

There is a dire need for this informative and timely book that carefully and meticulously details the history of the Spanish flu and elaborates upon a cohesive response and integrated efforts in response to it. This book revisits the Spanish flu in a unique way, starting with a brief scientific explanation of the virus and then going deeper to explore its historical context.

In this amazing audiobook, we revisit this terrifying time that left the world in fear, and you’ll learn:

The Spanish flu was a tragedy on a massive scale, but it also left in its trail the blueprint of how we all should respond to similar future events. This is an extremely relevant book, especially because it highlights all these questions and more in much detail, so we can increase our awareness of the event and be prepared to better deal with the current pandemic and any future ones.

Now, it’s your turn to take action. Scroll up to click the "Buy Now" button, and let’s begin!

What listeners say about The Spanish Flu

this is a book about the virus behind the pandemic. I was hoping for a book about the socioeconomic consequences. how countries and people reacted and recovered. this book glosses over that in a couple sentences and the other 2 hours are about what species of animals can have what class of virus etc. closer to a year 12 biology report than a history book.

the narration is really awful. mispronunciations throughout. seems like a robot is the narrator.

Brilliant story about how humanity tackled past pandemics. I have enjoyed to learn about the science behind the past and current pandemic.

Excellent book about the influenza pandemic. Good perspective on today's problems and good background for what is currently happening. This book amazing motive all of these books guidelines are sincerely beneficial. i might recommend this book to all

I am very happy to listen this great one book

I must say that this book is very helpful for all people who want to Spanish Flu. This book is what I need when it come to Start. Overall, this True Story of the 1918 Great Influenza book is a must listening for us, I am very happy to listen this great one book.

Lot of important information gathered in this book

The book is well researched and I like the detailed account of why the pandemic was so devastating. Helpful to understand the history of pandemic in the world. A lot of important information gathered in this book.

I learned about the flu virus

This book was incredible. I learned about the flu virus, past pandemics, what we've done to combat the flu and what we still need to learn. Also deeply understand the disease and its parallels with the current world pandemic.

This book was very informative and fascinating

Excellent. This audio book is a true eye-opener and will help you look incredibly closely at the Spanish Flu. This book was very informative and fascinating. The author chronicles an appalling history in a most human way.

This book assistance me to Improve my skill

Excellent book with a timely application. Great listen. Also, came in excellent condition. Thank you very much I want to prefer this guidebook for everyone who is searching as like this guide.

A useful guide forever. I'm inspired! The content of this book was excellent and good for us. I listen this book and I get this book so helpful. I get more experience. I'm happy that I found it, and I would recommend this Audiobook to others. I purchased that from Amazon and enjoyed it.

Great book for anyone !

I listen this book daily, and it has changed my life, I was such a negative person now I look for areas each day to be grateful and positive. You really have given me so much help. Thank you