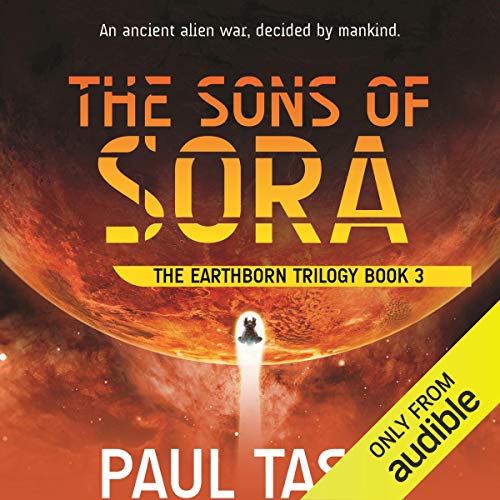 The Sons of Sora

Set 16 years after the events of The Exiled Earthborn, this explosive conclusion of the Earthborn trilogy tells the story of two brothers, the sons of Lucas and Asha, tasked with surviving the Xalan war to ensure the continued existence of the human race.

Noah, an orphan from Earth's last days who, as a child, was smuggled to safety across the stars, is now nearly a man and a leader to the young enclave of Earthborn who reside on Sora. When the tranquility of their settlement is shattered by a shocking assassination attempt, Noah turns to his combative younger brother, Erik, Lucas and Asha's only child by blood, for aid. Their journey takes them to the remnants of a dead planet, an outlaw-infested space station, and back to Sora, whose inhabitants are bracing for a final showdown with the bloodthirsty Xalans.

They find themselves facing a new evil: the omnipotent Archon, who is somehow controlling the whole of the Xalan horde, and his bloodthirsty lieutenant, the Black Corsair, who has an unmatched taste for brutality. The Archon, so-called God of the Shadows, has unearthed knowledge that could wipe both Sorans and humans alike from the face of existence. The descendants of the Earthborn must uncover the true nature of the Archon and the Xalans before he burns everything they know and love to ashes.

What listeners say about The Sons of Sora

An excellent conclusion to an engaging story.

A great way to wrap up the trilogy. I had no idea this would be where the story would lead when I began the series. I thoroughly enjoyed the story. Thanks Paul

I chewed through this trilogy so fast. It was a great story with a great narration. I recommend all three books.

LISTENER BEWARE! The story is so epic and riveting, you will be sucked into the universe that Tassi has created. One of the best stories I’ve heard in a long time!

Not as Good as the First Two

Really boring. Had to skip to the final chapter to see what happened

Excellent end to the trilogy.

A little confusing at times, but we'll worth the listen. I highly recommend this to all.

The first two books in the series were very good. I enjoyed the characters and I was fully invested in them. This third book, not so much. It is very slow and confusing. Chapters drag on and on without really getting anywhere. I don’t care at all about any of the characters anymore and I just want it to end.

Some great visual ideas could not move this story past the predictable nature of the plot.
Unfortunately the ending of the 2nd book set this book up to be extremely predictable. I can honestly say that I wasn't very surprised by any of the attempted plot twist, nor the ending.

loved the whole series. but by the end someone died and I don't think it was necessary. it kind of lingers with me even now being done with the book.

This series lost its luster on me. Moves way to fast feels like 3 books in one with no focus.

I just loved everything about this series. I read some of the reviews and cannot fathom how some people didn't like it! It has adventure, love, comradery and plenty of action.

That should be the subtitle for this as the author cannot help but raise the dead as you will read in the conclusion to The Earthborn Trilogy. Despite that - it is a fitting conclusion to the audio series. Yet again our heroes do escape death time and time again which does get a bit wearying after a while. However the story makes up for it as does the mind blowing revelation towards the end. Secrets of the universe anyone? Keep listening.