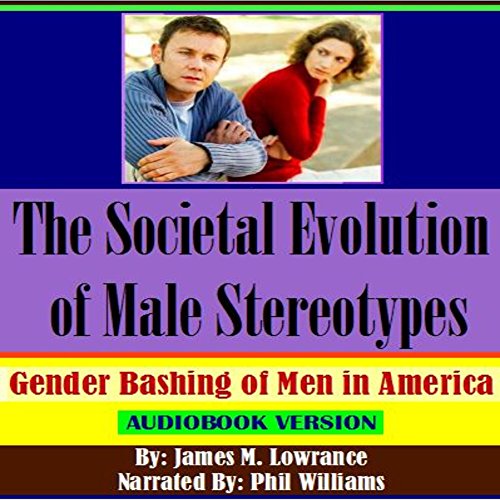 The Societal Evolution of Male Stereotypes

"When a negative trait or practice is generally and entirely attributed to a people of a particular race, gender or origin, it is an unfair generalization that we call a 'stereotype'. When it manifests unchallenged and unanswered, it can over time cause society to lose respect for a particular people as a whole or to an extent, for society itself." - Jim Lowrance

Chapter One: Why Write on Gender Stereotypes?

Subheadings within the Chapters:

What listeners say about The Societal Evolution of Male Stereotypes

The title of this "work" ( i use quotatons because the content is a hot, laughable mess and nothing more) is ambitious and serious, but alas, bears no relationship to its content, which is intellectually vapid, and astonishingly myopic. The author never discusses the evolution- that is, the origin, construction, and maintenance- of male stereotypes, and procedes as though traditional gender stereotypes arise out of a vacuum, rather than from patriarchical gender ideologies. The author might be well advised to do some research before adding his two cents, which are not even worth that paltry monetary value.