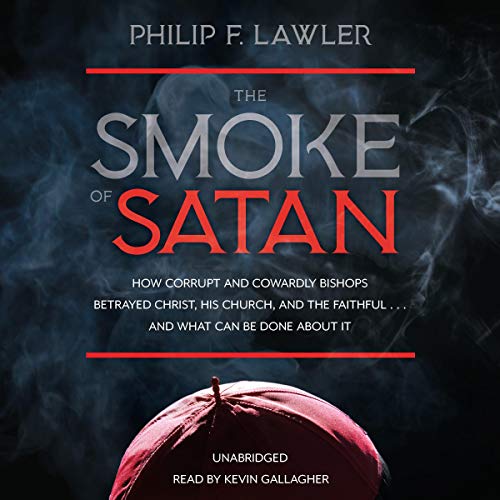 The Smoke of Satan: How Corrupt and Cowardly Bishops Betrayed Christ, His Church, and the Faithful . . . and What Can Be Done About It

The Smoke of Satan: How Corrupt and Cowardly Bishops Betrayed Christ, His Church, and the Faithful . . . and What Can Be Done About It

The sex-abuse scandal, which erupted anew in 2018, poses the greatest challenge that the Catholic Church has faced since the Reformation. In The Smoke of Satan, veteran Catholic journalist Philip Lawler explains why the crisis is even more severe than when it first commanded headlines in 2002, and how the failure of Church leaders goes all the way to the Vatican.

In this unflinching look at the crisis threatening the Church and her members, Lawler:

This crisis, brought about by the failures of corrupt and cowardly bishops and clerics, has been allowed to fester long enough. It is well past time for serious action to be taken at every level before more lives are ruined, more souls are lost, and more fractures divide the Church.

In this book, Lawler details the problems besetting the Church…and lays out a clear plan to overcome them in order that the Church and Her members may once again thrive and bring souls to Christ.

A Practical Summary and Logical Look at the Issues

Philip Lawler has been covering Catholic news for years, particularly the salacious and sickening reports that The Smoke of Satan addresses. This means that the Catholic Church sex abuse crisis has, sadly, been front-and-center in his work on a daily basis for more than 15 years. This affords Lawler a unique perspective and understanding of how such atrocities could not only come to pass but also, essentially, be protected by a corrupt hierarchy.

In short, there are various flashpoint moments in Church history, usually followed by periods of unrest and even confusion before things begin to settle down. Unfortunately in our day and time, the unrest that followed the second Vatican Council resulted in what we have all, by now, been disgusted to learn about.

Lawler pulls no punches. The Smoke of Satan is an excellent crash course summary of the key dates, names and developments that have arisen since the Boston scandal in the early 2000's - with special attention to the shocking summer of 2018. More importantly though, this is a hard but necessary look at what needs to change in the Catholic Church. Because if those in authority do not embrace significant self-appraisal and continue to take even more radical corrective measures, the negative fallout will reach far beyond the appalling sex abuse crisis. And Lawler's appraisal of the situation may surprise the reader - as the most obvious steps have already been taken, yet better results are still needed in the Church.

The narrator Kevin Gallagher is very pleasant to listen to. His voice is natural and smooth. For a non-fiction book focused on laying out the facts, his voice never distracts from the core material. Yet, he manages to remind the listener with his passionate reading, that a passionate response is needed to the crisis at hand.

I would certainly recommend this or any other audiobook from Philip Lawler and/or Kevin Gallagher.

Lawler lays out not only the problems and their sources, but an outline of solutions and ways for lay faithful to remedy the crisis.

I really enjoyed listening to this book. it really lays out the problems and the solutions!

Informative. I feel ten times more informed than before. God Bless the author and narrator.

Lawler hit the nail right on the head! Beautiful solutions to the problem are presented!

A lot of good things but way too many false generalizations about priests who are pastors. You’d think we all have cooks, cleaning people, fancy rectories. The author should see how most of us really live! While the author has no problem belittling faithful clergy, he goes out of his way to defend Francis and engage in popesplaining. I don’t think he has any clue as to the reality faithful clergy face. He obviously has his own agenda. While he is right about many of the problems, he is intentionally blind to others, their causes, or any practical solutions. There’s a term for speaking of problems without real solutions...whining. Don’t waste your time with this book

As if Bishops just need to try harder and lay people need to offer helpful suggestions. Ignores decades of evidence of organized subterfuge and deliberate infiltration.

This book was written not out of a spirit of joyful renewal or celebration of life or very legitimate dissent within the Catholic Church. No, it was written in a complaining, condemning, nagging, repressive spirit that exults suffering as if it were a cardinal virtue. No thanks.