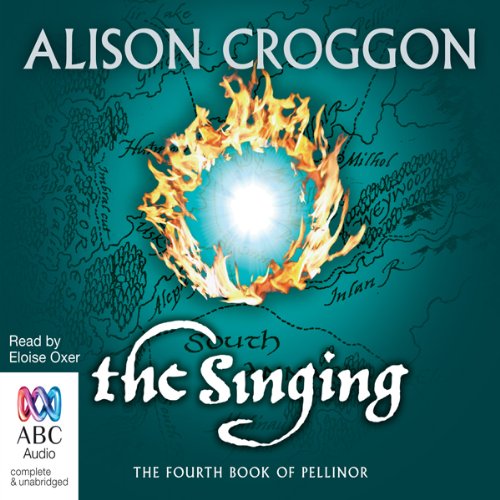 In an increasingly battle-ravaged land, Maerad, Cadvan, and Hem desperately search for one another as they make their separate journeys. The Black Army is advancing north, and even as Maerad faces a mighty confrontation with the Landrost to save Innail, all of the Seven Kingdoms are threatened with bitter and devastating defeat. Yet in Maerad and Hem lives the secret to the mysterious Singing, and legend holds that if they release the music of Elidhu together, they have the power to defeat the Nameless One. Can brother and sister find each other in time to fight this all-powerful enemy, and are they strong enough -even reunited - to defeat him before all is lost?

What listeners say about The Singing

There is a part missing!

What made the experience of listening to The Singing the most enjoyable?

This is another great book in a great series but there is a part missing towards the end. I don't think it's a whole chapter but should be fixed..

What other book might you compare The Singing to, and why?

The rest of the series.

Have you listened to any of Eloise Oxer’s other performances? How does this one compare?

She is a fantastic narrator. I've listen to this book and the others that she has narrated in the series many times

fantastic in every way, loved it to pieces!! my favourite book series EVER and worthy of much more praise than it gets.
narrator was incredible, and the storytelling was amazing (if the song was a little dodgy) but nowhere near enough to make me give it any less than the 5 stars it deserves. a true pinnacle of fantasy writing.