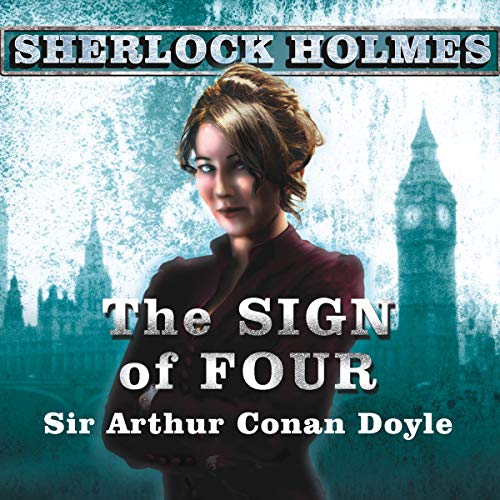 As a dense yellow fog swirls through the streets of London, a deep melancholy has descended on Sherlock Holmes, who sits in a cocaine-induced haze at 221B Baker Street. His mood is only lifted by a visit from a beautiful but distressed young woman---Mary Morstan, whose father vanished ten years before. Four years later she began to receive an exquisite gift every year: a large, lustrous pearl. Now she has had an intriguing invitation to meet her unknown benefactor and urges Holmes and Watson to accompany her. In the ensuing investigation---which involves a wronged woman, a stolen hoard of Indian treasure, a wooden-legged ruffian, a helpful dog, and a love affair---even the jaded Holmes is moved to exclaim, "Isn't it gorgeous!" This audiobook includes the bonus Sherlock Holmes story "The Red-Headed League."
Public Domain (P)2009 Tantor

the third Sherlock book I've listened to and this time the motive of the killer didn't take longer to explain than the rest of the book.

This book was very interesting. Can't wait to read more of Sherlock's adventures. Hope to be as thrilling add the next.

Would you consider the audio edition of The Sign of Four to be better than the print version?

I have not read the book, but Prebble's use of accent, inflection, and cadence make it easy to believe that he is speaking different parts, and never once did I have to wonder which part he was voicing.

Doyle was a genius in that he could conceive a sequence of events that would create a set of circumstances and leave a set of evidence that average people would never string together.

Have you listened to any of Simon Prebble’s other performances before? How does this one compare?

I have also listened to Prebble's readings of The Study in Scarlet and The Adventures of Sherlock Holmes. This is no less excellent than the other novel or collection of short stories.

At the end, I was moved to seek out more Prebble readings of Doyle work. :)

The narrator does an excellent job interpreting this Sherlock Holmes tale...good accents, good pacing. The story itself is not quite as good as some of the Sherlock tales, so I gave it a four, not a five.

The narrator has just the voice for the period, tone and characters in this novel. One of my favourite Holmes' books. Recommended if you haven't read any Arthur Conan Doyle before.

Ah, well, anyone could appreciate Sherlock Holmes stories, and this is a good one. Heartily recommended.

This is the first Sherlock Holmes stories I have ever listened to and it was entertaining. The reader had an excellent voice and both stories keep you interested. Definitely worth a credit :)

It starts at 221B Baker Street in London in 1888. The Sign of Four is a complicated little detective novel which was released in 1890. The case is a thoroughly interesting one. The story is excellent, but Simon Prebble's narration makes it even better. It s audio books like this that demonstrate the impact of of incredibly great narration to make the story even better. I highly recommend this quick listen.

This is a good Sherlock Holmes story worth the read if you enjoy his adventures.

I love Sherlock Holmes. Simon Preble has a wondeeful voice and sounds like I always imagined Dr. Watson 's voice would sound like.

This story gets better each time you listen. Thoroughly recommend it to all Holmes fans