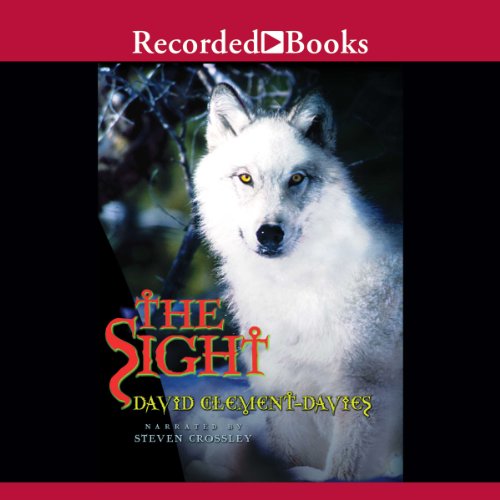 The works of David Clement-Davies have been honored as Booklist Books of the Year and Book Sense 76 selections. Clement-Davies creates an intriguing new mythology for the spectacularly envisioned action of The Sight.

After a pregnant she-wolf and her pack take shelter in an abandoned Transylvanian castle, they are set upon by Morgra, a lone wolf whose traveling companion feeds on the dead. One of the she-wolf's pups is destined to hold a key to unimaginable power, and Morgra will do anything to seize that power for herself.

This was the first fantasy book i have ever read... that being said, i may be slightly biased because the first time you enter the world of fantasy your life is changed forever! However i just finished listening to this book again as an adult and it was just as great as i remember... sometimes i would stop and laugh at myself for reading about talking wolves, but that goes along with the fantasy genre i guess. I love the characters in this book, and i also love the daringness of Clement-Davies to "go there"... this is not a cookie cutter everyone lives happily ever after read... far from it! If you are looking for something different then give it a try! its an easy read, and you won't regret it!

This is by far my favorite book ever written. The way that it is written is sick amazing. I've read this book at least three times, but I was planning on buying the audio book. Clement-Davies is an amazing author, and I wish that they had his second book, Fell. But The sight is a heart gripping book. If you are fainthearted, this wouldn't be the best book ever. I think i might've cried in it. Sadly, i dislike the magic part of it. i didn't like that too much. THE ANIMALS TALK BTW

a wonderful story that had good character development, strong lore and history. but when it came to flow middle of the book it started jumping until the ending and it just flops on to it's face. characters are killed and the whole point of the story is ruined for me.

loved this book. remember every detail! loves wolves in general and this story was awesome!

one of my favorites

The weird quasi mysticism and if I know myself then I have power over all undertones aside. This book is just so very long. I would say over half is unnecessary adjectives and entire chapters go by where nothing really happens and doesn't impact the story at all. Guy reading the book did a good job tho!

If you like animals and magic then yes. You would find it a gem.

It was fresh, and intriguing

the story brings the reader through a fantastic story about a group of wolves. the story is strong and a lot of imagery. the journey was wonderful and I can't wait to read about fell

This book has a great story, but it feels very slow. I felt like the author was adding dialogue just to draw out the plot and this did not work.

What would have made The Sight better?

Would you ever listen to anything by David Clement-Davies again?

Would you listen to another book narrated by Steven Crossley?

If you could play editor, what scene or scenes would you have cut from The Sight?

Captivating a must listen

Would you consider the audio edition of The Sight to be better than the print version?

They are equally as good, for those who have listened to this I recommend the other book Fell

What was one of the most memorable moments of The Sight?

Dont forget the other book Fell second of the series