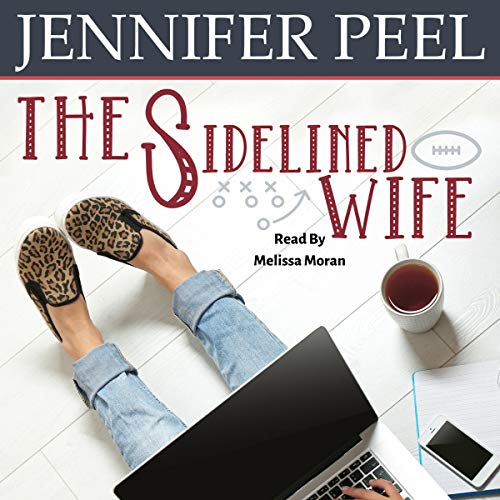 She's getting back in the game, one blog post at a time.

Samantha Higgins never thought driving her husband's car would forever change her life. But one conversation later, heard through his Bluetooth, and Samantha is changing her last name. While trying to figure out who Samantha Decker is, she writes what she thinks is the final post on her blog, announcing her divorce. When the post goes viral, she finds herself with a new title, The Sidelined Wife, and an unbelievable following.

To make matters more interesting, her younger brother's best friend, Reed Cassidy, who was a thorn in Samantha's adolescent side, moves back to town as the new head football coach for her son's high school team. Unbeknownst to Samantha, Reed has harbored a crush for his old babysitter all these years. But, Samantha isn't keen on dating anyone, much less a younger man that used to booby trap her bedroom with firecrackers.

While Samantha is doing her best to learn and even make up some of the rules of single life and being a semi-celebrity, Reed comes in and changes the game. Now Samantha must decide if she should get back on the field or if she prefers the sidelines.

"This story will be on every girl's night book club list this year." (Farmhouse Reviews)

"Fiercely honest, brave but lighted-hearted, The Sidelined Wife by Jennifer Peel is one of the best romance novels I have read in a long, long time." (Readers Favorite)

What listeners say about The Sidelined Wife

I haven’t ever listened to a audio book before and I’m so glad this was my first one!! I’m already a huge Jennifer Peel fan, and this book is one of my favs (ok so they are all my fav), but this one is incredible! The characters are so relatable. I laughed, I cried and I fell in love. Jennifer is amazingly talented and I can’t wait to read the rest of the series!!!

I kept making excuses to pop my headphones in and listen to this one! What am I going to do until the next one I'm there series comes out?! Binge worthy.

The story of Samantha and her feelings of betrayal and anger and her indignation over her ex ignoring their son are so human and raw. Ms. Peel has written a real person, not some perfect saintly character. Even the ex turns out to be a complex character, not the vilified norm that sometimes happens. The new love interest isn't perfect, either, he, too makes mistakes. I love that Ms. Peel takes the time to develop all the characters!

The Delaney family is HILARIOUS but is not without issues. Mimsy is my favorite! She's the comic relief to the pain Samantha is experiencing. Speaking of which; I love that Ms. Peel gives her character the time she needs to cope and to grow as a person.

I'm a huge romantic and so the arrival of Reed on the scene was fun and oh, so sigh-worthy! But I like that Ms. Peel doesn't have him "fix" Samantha. Samantha has to deal with complex emotions and the fact that she did love her husband for 18 years. She doesn't just get over him; she has to work through her pain, her feelings of betrayal, her insecurities and get to a place where she can forgive enough to move forward with a healthy new relationship.

The journey we go on with her is wonderful and there is much wisdom imparted by the author. (Along with hands-down, THE most romantic kiss scene ever written!)

Narrator: 4.5 stars
Melissa Moran does an amazing job of voice acting! She has a low enough voice that the male characters sound authentic. She also does an excellent job with the older voices of Mimsy and Mrs. Higgins. Ms. Moran's voice creates a wonderful atmosphere and the sincere emotions of the characters she acts shines through. I will happily listen to her anytime!

Let me repeat - I loved this book. It is humorous and witty with a little drama. The HEA was there but I can’t wait to read more in this series.

I love Jennifer Peel and this did not disappoint. Her characters are so vibrant and her story so detailed that you really feel like you're apart of it all. The narrator was wonderful. She told the story beautifully. I would definately purchase more of this author and narrators audible books.

This is my favorite audiobook out of the five that are presently on the market in Audible ("Trouble in Loveland" is second). I enjoyed everything about this "comeback" story. I could barely stop listening to go to work or grocery shopping. The narrator was excellent in handling male and female voices, which doesn't always happen. It magnified the enjoyment of the book. Thanks Ms. Peel for a terrific read.

One of my favs

Love Samantha and her story from the "sidelines"

I LOVE Jennifer Peel's books, so when I found out she needed reviews on the audiobook of The Sidelined Wife I jumped at the chance to help out. Needless to say I didn't hesitate to download the audiobook and start listening to it IMMEDIATELY.

Wow! Having gone through a divorce after more than 10 years of marriage this book hit all the right notes, especially since the reason(s) for my divorce were similar. Even though it's been 30 years since my divorce some of the feelings I had while going through it came back while listening to this audiobook. Making us feel such emotions is one of Jennifer Peel's strengths as a writer, although sometimes it takes a toll on us readers.

The book opens with Samantha's ex-husband, Neil, picking up the rest of his belongings and giving her his key to what had been their home. He threw it all away by having an affair and now he's living with his pregnant, much-younger, girlfriend--who sounds dreadful and had I me wondering more than once why he got involved with her. I'd really like to know the backstory on that.

Sam has her family for support, although I think most of the support came from her brothers and their wives, not her mother and grandmother who were quite hilarious with the NDA's and "holy" water. I loved Sam's relationships with her sisters-in-law and I felt they were just what she needed. Girlfriends are the best when going through hard times and changes in your life, especially when the changes are thrust upon you.

Sam receives a real shock when Reed, her younger brother's best friend, shows up at her first the-divorce-is-final family dinner. He's moved back to town and is her son, Cody's football coach. Sam definitely notices that Reed is all grown up, but has a hard time getting past the memories of babysitting him and the pranks he and her brother Peter pulled on her. She has no idea that Reed has always had a crush on her and pulled those pranks to get her attention. It takes her more than a little while to push all those memories to the back and get to know the man Reed is now.

I liked that Cody was Samantha's priority, as he should be, and that she admitted she wasn't ready to start dating. No rebound guy for Sam, she was concentrating on herself--healing and finding out who she was now. I was glad she was taking it super slow with Reed--while it may have been painful for Reed, it was great for Sam and those reading the book. Slow burning romances are the best!! While I loved reading Sam's bog entries I could never open myself up like that to the world. As it was I felt so bad for her when she overheard comments at the football games, like her being divorced meant she was on the prowl for someone else's husband or it was contagious so they had to keep away from her to avoid being infected. What nonsense! That was one positive thing about moving during/after a divorce--no one knows the ex-husband so friends don't have to "choose a side".

If you can't tell I loved this book, as I've loved every Jennifer Peel I've read. The characters are so developed it's like I'm reading about a real person, not a fictional character. I already have the next book in the series The Secretive Wife (More Than A Wife #2) and look forward to reading it soon.

The only drawback to having an audiobook vs an ebook is I can't refer back to it while reviewing and I can't mark favorite lines or things I found hilariously funny. I may just have to get an ebook of this one afterall.

I liked the voice of the narrator, Melissa Moran, and thought she did a fantastic job with all the different characters--and there are a lot of them as Sam's got brothers and they're married, plus her parents, grandma, the ex-husband, the boyfriend, her son, etc.

Jennifer Peel has the ability to draw you in! The characters draw you in and the story comes alive. I absolutely could not put "The Sidelined Wife" down. Be prepared to get drawn in and become part of the story. The characters become real and you have to know how their story ends. I loved this book and will definitely be recommending it!