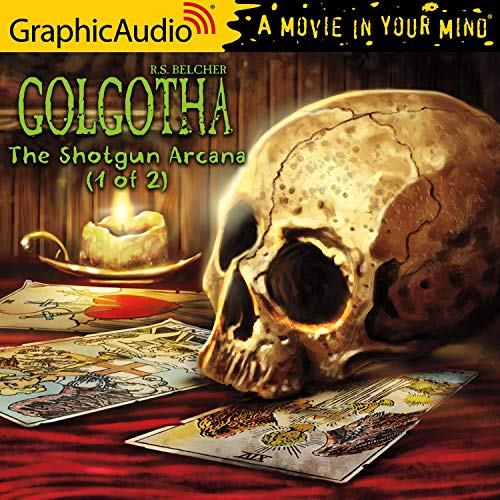 The Shotgun Arcana (1 of 2) [Dramatized Adaptation]

R. S. Belcher's debut novel, The Six-Gun Tarot, was enthusiastically greeted by critics and listeners, who praised its wildly inventive mixture of dark fantasy, steampunk, and the Wild West. Now Belcher returns to Golgotha, Nevada, a bustling frontier town that hides more than its fair share of unnatural secrets.

1870. A haven for the blessed and the damned, including a fallen angel, a mad scientist, a pirate queen, and a deputy who is kin to coyotes, Golgotha has come through many nightmarish trials, but now an army of 32 outlaws, lunatics, serial killers, and cannibals are converging on the town, drawn by a grisly relic that dates back to the Donner Party...and the dawn of humanity.

Sheriff Jon Highfather and his deputies already have their hands full dealing with train robbers, a mysterious series of brutal murders, and the usual outbreaks of weirdness. But with 32 of the most vicious killers on Earth riding into Golgotha in just a few day's time, the town and its people will be tested as never before - and some of them will never be the same.

The Shotgun Arcana is even more spectacularly ambitious and imaginative than The Six-Gun Tarot, and confirms R. S. Belcher's status as a rising star.

Audible chose this to basically make this into the equivalent of a badly produced radio play. The story and writing are fun. As good as the Six-Gun Tarot

Nothing positive gained by orchestrating a twenty-ish actor cast of readers. REALLY annoying and very distracting background “score” of music snd noises which only synched with story less than half the time.

Worst of all: bad rendition as described above coming at the expense of dividing the book into two books for no gain, but with the consequence of literally doubling the price of the story (to get the whole story, you have to pay for two separate full price titles!

Dumb, dumb, dumb....expensive...and not even well-produced.

I’m a fan of the book and writer, but had I known ahead of time, I would have only purchased the kindle version. I recommend that to everyone without visual reading challenges. AUDIBLE: this was a bad idea and a worse rendition.

THESE BOOKS NEED TO BE HEARD!!!!

I had been waiting for this to come out on Audible for 2 years. After listening to the 1st in the series, The Six-Gun Tarot, I was hooked. But totally bummed that the other 2 weren't available. IT WAS WORTH THE WAIT! I hope these books get the recognition they deserve. They are just fun, weird, and not at all boring. If you're looking for something to use a credit on, give it a try...you won't be disappointed!!!!

I was worried the new format wouldn't be as good as. Fleet. but it was great in different way!