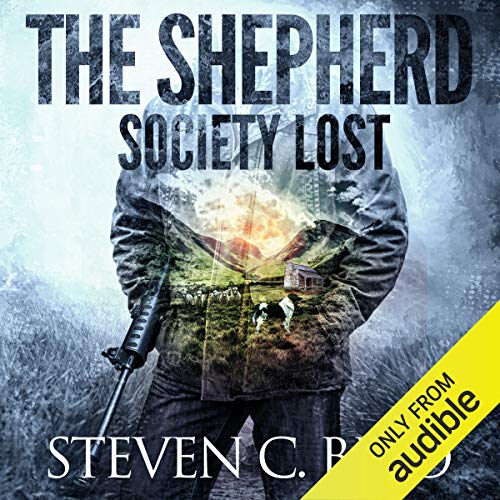 The Shepherd: A Society Lost is an action-packed post-apocalyptic thrill ride detailing the struggles of former sheriff Jessie Townsend as he and his family seek shelter from a crumbling world with a self-sufficient life on a homestead deep in the Rocky Mountains. Sanctuary soon becomes what he meant to escape, peaceful bliss slipping into desperation and despair in the aftermath of events that shook the foundations that shaped our world to the core. An unholy alliance of conspirators had sought the collapse of our civilization in order to rebuild and reclaim it as their own. Never truly intending to coexist, the unlikely allies found their courses diverging, leading to a struggle that dealt the final death blows to our society. In the absence of the order and structure of our modern civilization, evil, suffering, and chaos were unleashed throughout the world. As the post-collapse struggles of the outside world begin to threaten Jessie's mountain hideaway, a return to the world he left behind becomes a chance for redemption and survival in a society lost.

What a story. Absolutely Loved It.

Bravo Mr. Bird. This story is full of heartbreak and elation, defeat and victory. On to the sequel.

This is the worst book ever

Cheesy writing and lousy reading. I gave it an hour and had to quit and delete the book.

A total waste of time and money.

As always Steven Bird does an excellent job conveying the story and pulling you into it.

The book opens well and gives bits & pieces about how the world found itself in a bad situation with the wrong kind of people in charge. And that’s about all you hear for a backstory. The main character, Jesse, goes through many woes but is surprisingly still alive at the end of the book.

The idea of the story is good; the story itself was just okay. Nothing really jumped out at me to form a connection with Jesse. By the end, I really didn’t care if he made it or if someone else did; and someone had to continue because this is first in a series. That sounds rather harsh, but I never became fully invested in this book.

The narrator did a fine job, but several words in the story didn’t translate well from reading to narration; particularly conversational words that should be contracted when reading aloud. I noticed this more during the last 1/3 of the audiobook which made the dialogue seem odd. A good example is “I do not think that room is safe.” Real people talking, especially in a heightened & stressful situation, would say “don’t”. But that’s not the fault of the narrator and there are many examples similar to that.

Overall, this book was at most decent; but I won’t listen to any more in the series. I was given a free copy of this audiobook in exchange for my unbiased review.

I love this book but not the narrator. I'm sorry but I have to be honest.

I went into this series not knowing anything about it except that it was written by an author who wrote another series I liked. This book is unique, and whenever I expected it to go one way, it went off in a completely different direction. As someone who has read/ listened to many, many post-apocalyptic books it was a breath of fresh air. I like the main character and enjoyed the storyline and it’s action-packed scenes. If you’re looking for a post-apocalyptic book that isn’t predictable, look no further.

Liked the way it was written, personal story with good backround. Would recommend

The story is engaging and the characters become real as the story unfolds. I couldn't wait to see what would happen next. I will definitely be reading the rest of the series.

Really great book. Not a big fan of the narrator, but I really loved the story