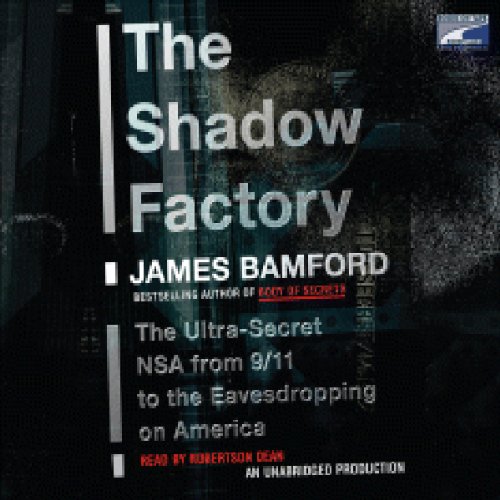 Today's National Security Agency is the largest, most costly, and most technologically advanced spy organization the world has ever known. It is also the most intrusive, secretly filtering millions of phone calls and e-mails an hour in the United States and around the world. Half a million people live on its watch list, and the number grows by the thousands every month. Has America become a surveillance state?

In The Shadow Factory, James Bamford, the foremost expert on the National Security Agency, charts its transformation since 9/11, as the legendary code breakers turned their ears away from outside enemies, such as the Soviet Union, and inward to enemies whose communications increasingly crisscross America.

Fast-paced and riveting, The Shadow Factory is about a world unseen by Americans without the highest security clearances. But it is a world in which even their most intimate whispers may no longer be private.

What listeners say about The Shadow Factory

Great story, but at times you are swamped by technical computer capability data toward the end of the book.

if you weren't paranoid before this book you will be after it.
this book in detail sheds light on just what lenghths the government goes to in order to collect data and erode personal privacy in the name of security. . listened to it straight through couldn't stop

nobody because it doesn't work

What was most disappointing about James Bamford’s story?

that i bought the audiobook and could not hear it