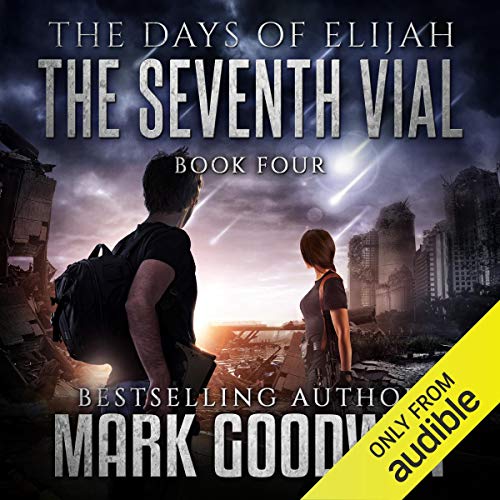 The Seventh Vial: A Novel of the Great Tribulation

The Seventh Vial: A Novel of the Great Tribulation

The ultimate battle which will decide the fate of Heaven and Earth has finally come. Everett and Courtney Carroll have fared better than most through the past seven years of the Great Tribulation, but the eve of Armageddon refuses to let them live out the last hours of this present age without conflict, trouble, and persistent peril.

The Bible has prophesied of the Seven Vials of God's Wrath, the final judgments which will utterly destroy what's left of a decimated planet. These calamities will bring a plague of festering boils upon the followers of the Antichrist, rivers and seas will turn to blood, and a global earthquake will raze the cities of the earth to the ground. All of this in the midst of the war to end all wars.

Everett and Courtney must leave their sanctuary of relative safety, but there is nowhere left to turn. And getting anywhere in these last days means traversing wastelands patrolled by Global Republic drones or crossing hostile deserts infested by the violent jihadi armies of Caliph Marwan Bakr. It won't be the first time they've been trapped between a rock and a hard place, but it might be the last!

Don't miss the final chapter of the Days of Elijah, the end-times sensation which chronicles the lives of those who must endure the Great Tribulation and the unabated wrath of God!

A fantastic series, well written. I loved the beautiful King James Scriptures The story line was filled with action, the characters were believable and there was a blessed absence of swearing, blasphemy and inappropriate behavior. Though I would not look to it for doctrine; that’s why we have the Bible; it was a thoroughly enjoyable experience. I will be looking for more from this author.

An ever exciting book in the series that ends exactly as i was hoping. Would recommend to anyone the whole series.

Mark Godwin at his best. I will hate to have this series come to an end!!!

Great book, little too much of same.

I struggled to finish this one only because it was more of the same. While realistic and plausible, too much warfare and describing tactics. Just personal taste.

another great series, can't wait to get into another series. may God bless you. .

Hooked from the first line

Heard God's voice speak through each caracters story, could relate in my personal life. great knowledge of the Bible and the Christian Doctrine.

amazing story the best so far I believe

The greatest story I've heard so far by Mark Goodwin. The narrator did a wonderful job. I would recommend this book to anyone.

I started with The Days of Noah and when it ended, I had to know what happened next. I was not disappointed. Mark Goodwin writes a series that is exciting and informative. The Days of Elijah stimulates the imagination and makes me want to read more from Mark Goodwin.

Worth reading in print

I first listened to the Days of Noah and enjoyed that 3 book series so decided to add Days of Elijah to my audible library. First, the story is decent. I would not recommend trying to compare to the Left Behind series and except a similar series because they are quite dissimilar in many aspects with the exception of the scriptural judgements, etc.. The writing is a bit more two dimensional and I didn’t feel pulled into this series anxiously awaiting what would happen next. There was quite a bit more violence than I anticipated and felt the series lacked depth. The narration was stilted, choppy, and fairly flat.
Overall, if you are looking for an easy read, it might be worth it...in print.

While this is a fiction novel, it is a spectacular proposal of what the tribulation may be. Once you begin series, you won't be able to stop listening. excellent performance narrators!

Glued to my earphones!

I started with The Days of Noah. Unable to stop thinking about the storyline, I went on to The Days of Elijah. The storytelling was so fantastic I couldn't stop listening. It was so compelling because I could actually envision how many of the events could actually happen today in similar ways as Goodwin describes. I realize it is only fiction, but I appreciate how closely he held scripture to his timeline.