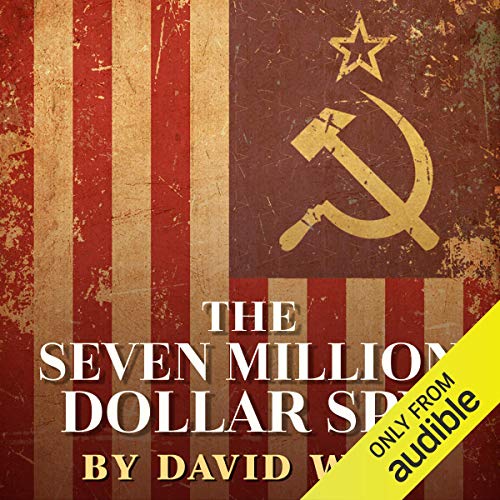 The Seven Million Dollar Spy reveals, for the first time, the inside story of the dramatic US counterintelligence operation that resulted in the capture of the most dangerous mole working for Russia inside US intelligence. Now, the former senior KGB spy, to whom the US paid seven million dollars for Moscow's file on the mole, is identified by both his real and code names.

The audiobook also reveals how a death threat by the Russian Mafia against the former senior KGB spy over a spoiled caviar deal worth millions was the key to unmasking the mole inside US intelligence.

The Seven Million Dollar Spy tells the story, and final success, of the determined FBI counterspy who spent six years pursuing the mole and approaching 27 potential KGB sources - despite pressure to stop from his superiors who said he was wasting both time and money with nothing to show for it.

What listeners say about The Seven Million Dollar Spy

Good story, but.... the details

This is a great story and one of my favorite narrators, Kevin Pariseau, makes it even more enjoyable. However, I am dismayed on how the details of how this all unfolded is vastly different from the retelling of the ex-CIA people's telling which was not nearly as dramatic as this story. I feel some details are left out that are hit on in other stories of how this all unfolded and whose lives it affected. Not sure, or could ever be sure, which stories hold the complete truth. But, this took a long path to get to the end and along the way you get to know a vast array of really interesting characters.

This is a whirlwind ride of high stakes espionage you don’t want to end. Fills in the most important gap of knowledge surrounding how the traitor, Richard Hanssen, was found.

Some good info but also kind of a mess

If you are already familiar with the Hanssen case then this is a useful book but otherwise I think you'll be pretty confused. It appears to be cobbled together from different sources with lots of repetition and is not a coherent or straight forward narrative. I did learn some new things though given the sources are FBI and CIA you always have to wonder how much is true.

Not sure of a better book on Hanssen but Circle of Treason on the related Aldrich Ames case is a much better read in part because in that case the mole was identified thru sleuthing whereas this one was broken by pure bribery after the sleuths had identified the wrong guy. I actually would have liked more on how they botched that part of the investigation.

The narrator is pretty good.

For a reader/listener interested in the history of espionage, this is a terrific listen. Totally new material on an old story of Robert Hanssen. The only negative remark I can make is sometimes author repeats the same material word for word for several minutes. Some small pieces of story -- such as about chemical attack on Britain's territory using 'Novichok' seems unrelated to the main story, But these are small things. Overall -- a totally terrific new story, absolutely new twist to an old case, I could not put it down.

Fascinating story from beginning to end. Very well researched and very well told. Everything a true espionage story should be. Five stars.

The book was very interesting and well delivered. David Wise’s book is thoroughly researched!
Must read

You can always count on David Wise; new facts emerge that give you a great understanding of the subject he covers.