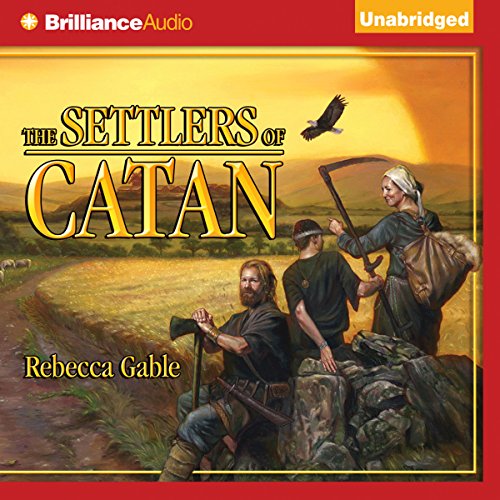 The Settlers of Catan

The Settlers of Catan

The year is 850. In the seas of northern Europe, the small coastal village of Elasund falls prey to marauding neighbors. Their food stores pillaged, women and children stolen, livestock destroyed, the villagers are left to barely survive the harsh winter - and contemplate a drastic solution to their recurring hardships: leaving the only village they have ever known. Foster brothers Candamir and Osmund lead their people on an epic quest to a mythic island home, but without knowledge of exactly where the island is, they must trust the gods to deliver them safely. Lost at sea and set adrift, an extraordinarily violent storm washes them ashore the island famed in pagan lore: Catan.

They quickly set about building a new society but old grudges, animosities, and social orders lead to fraternal strife. As the ideals of Candamir’s Christian slave spread throughout the village and conflict with pagan law, the two belief systems clash. When both Osmund and Candamir fall in love with Siglind, the mysterious queen of the Cold Islands, things come to a head. Based on the wildly popular board game of the same name designed by Klaus Teuber, Rebecca Gable’s The Settlers of Catan is a must-read adventure rich in detail and rippling with intensity.

If you're not comfortable with slavery, skip it

What I wanted was a book based on the board game. What I got was an overly accurate historical fiction about the viking age. On its face it doesn’t sound that bad, but boy do the vikings love slaves/enslaving people! I was kinda expecting sheep and bricks to be prevalent, but you couldn’t go 5 minutes without slaves being a part of the conversation. Mostly conversations about taking slaves, some slaves are not good slaves, other slaves are like family slaves, “I’m not sure if we have enough slaves to go enslaving more slaves” etc. Of course all the characters being in TRUE HISTORICALLY ACCURATE form don’t see anything inhumane or abhorrent about slavery, keeping slaves or being slaves. I got through 9.5 hours and apparently that’s my limit as to how much slavery I can listen to before I’ve had enough. You could argue that “slavery is how things were done by vikings” but I would counter with “this book is supposed to be about a BOARD GAME, wgaf about historically accurate vikings?”.

Voice actor was okay, but I'm not specifically looking him up for other audiobooks.

Too many sex scenes

I cannot recommend this book with the graphic sex scenes it has. This is Not appropriate for children which is why I got it. I wanted an audiobook our family could enjoy together. I had many places I had to skip so as not expose the children to sodomy, adultery, and fornication. The storyline would not have been affected had these perversions been left out. Too bad as would otherwise have been a fun book.

Not a book for children

this book contains adult content not suitable for children. I enjoyed the book but only because I really like the board game.

A long tale of Misery and woe

I have no idea, to be honest im a tolerant man and I enjoyed parts of this book but there was so much doom and gloom. it actually got me down a bit. it was a story of a struggle and became a struggle to listen to.

i think smthing with unicorns and fairies so i dont slit my own wrists.

What character would you cut from The Settlers of Catan?

well you can really cut any of them as they all have a role in there.

right lads and ladies gaze here in horror on a tale of woe, more so than juliet and her oh no she dies. see thats what happens in this book. its about some people traveling to a far away land after the get raided in thier own and setting up a new life together. but far from trying to expand on new green world and play nice, they all want to kill and steal each other stuff or rape each other. heres the issue.

say you set up a world get me invested in the characters an then some one gets raped. its sad and horrible and you go oh no how will they survive and want to see what happens how they will struggle through. but then the person who just got raped has there brother killed and gets beaten up. your like oh my god . thats horrible im sad. how will they go on and survive.

then the person who is raped and beaten up has there house burnt down. and ur like ok does anything nice happen at all to this person? and then that person is raped again. after the 6th or 7th horrible thing ur like why should i read it. just bad things are happening.

and thats what killed it for me in this book. there is only so many times people can be murderd , raped, sodamized, tortured, kidnapped and betrayed before u go u know what. i dont want to listen any more.

It takes quite some time to get into the book, but once your into it, its a good book. Conversely though, the book does end very suddenly, and you are left wondering how they end up...

Went on to long

Continual reference to the Gods is wearing and our hero is really rather pathetic in that he can not make up his mind to leave or be the boss til the last 10 minutes. thanks