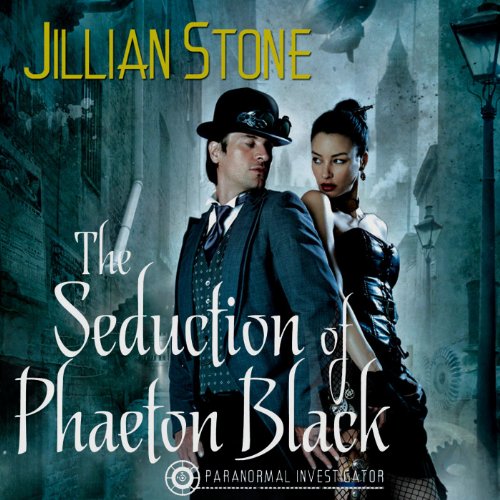 The Seduction of Phaeton Black

The Seduction of Phaeton Black

In the gaslit streets of Victorian London, phantoms rule the night, demons dance till dawn, and one supernatural detective dares to be seduced by the greatest power of all…He's the man with the magic touch. A master of deduction, seduction, and other midnight maneuvers, Phaeton Black is Scotland Yard's secret weapon against things that go bump in the night. His prodigious gifts as a paranormal investigator are as legendary as his skills as a lover, his weakness for wicked women as notorious as his affection for absinthe.

But when he's asked to hunt down a fanged femme fatale who drains her victims of blood, he walks right into the arms of the most dangerous woman he's ever known…She's the devilish Miss Jones. Pressing a knife to his throat - and demanding he make love to her - Miss America Jones uses Phaeton as a willing shield against the gang of pirates chasing her. As deadly as she is, with a derringer tucked in her garter, Miss Jones is not the vampiric killer he's been staking out - but she may be just what Phaeton needs to crack the case. As the daughter of a Cajun witch, she possesses uncanny powers. As a fearless fighter, she can handle anything from Egyptian mummies to Jack the Ripper. But when an ancient evil is unleashed on the world, she could be his only salvation…or ultimate sacrifice.

What listeners say about The Seduction of Phaeton Black

I've read the other Scotland Yard books by Jillian and enjoyed them all. This one is edgier. It's a great read and the storyline keeps you interested the whole way through. I liked the paranormal aspect and the lifestyle of societies fringe dwellers.

I was warned there was a lot sex in this book. I thought I was OK with that. One hour in and I had to stop. I don't want that much detail about anybody's sex life, real or imagined.

Not for the faint of heart.

My apologies to the die hard fans. I really like Steam Punk... usually.