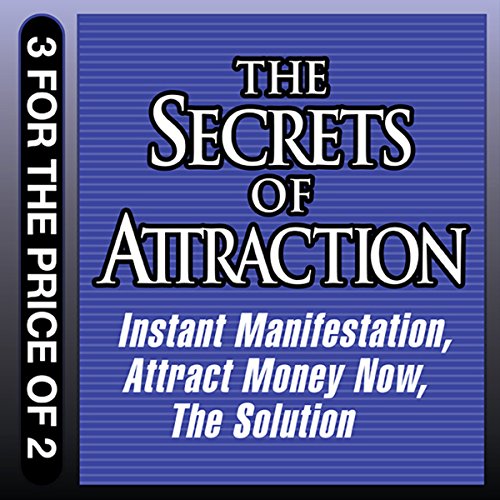 The Secrets of Attraction

What is the REAL secret to making the law of attraction work for you right NOW?

At last! Bestselling author and The Secret movie star Dr. Joe Vitale reveals for the first time how to instantly manifest what you desire. He explains the truth about the law of sttraction and guides you into understanding the hard-wired principles of the Universe.

Dr. Vitale's no-nonsense, tough-love, entertaining, educational and inspiring approach goes beyond a superficial understanding of manifestation to giving you full power to create your own destiny. Need money? Attract Money Now is the perfect blueprint for breaking free from debt, lack, struggle and fear. This is the exact same blueprint Dr. Joe Vitale used to go from a homeless nobody to a multimillionaire celebrity. It is a spiritual and practical system that will work for YOU.

Looking for answers to the challenges you face today? Want to know how to thrive (not just survive) in today's tough times? Dr. Joe Vitale has The Solution! Vitale goes beyond feel good pep talks to reveal the real solution to attracting miracles in every area of your life and transcending your problems. Inspiring, enlightening and mind expanding, Dr. Vitale's "solution" involves a proven step-by-step methodology to quickly take you from "Victim" to "Victor!"

What listeners say about The Secrets of Attraction

What disappointed you about The Secrets of Attraction?

The material is great, I'm not disappointed with that but what I am disappointed with is all of the disgusting noises the speaker makes. All I hear is him swallowing or the squishing noises of his lips. Its like he is chomping while chewing gum or something. It is sooooo distracting and grosses me out!

Would you be willing to try another one of Joe Vitale’s performances?

The material is great but the overall quality of the recording with the chewing and chomping noises is terrible. I have several dozen audiobooks and this is the only one I have where the swallowing noises are so pronounced.

Thought Provoking Enough to Listen To...

Would you listen to The Secrets of Attraction again? Why?

Yes, I listened to it a couple of times after purchase. There's lots of things he talks about that invoke you to start making a list and really being decisive about whether you are actually going to make a difference to your life!It's worth a second listen with a pen and notepad after just absorbing it the first time.

well, Joe of course! Actually he does go on about his cars and guitars and music and some of the anecdotal input makes you wonder whether he has a smidge of ego poking through - but if he's cracked it, then I guess he's entitled to a little self praise or smugness. In reality he only means to inspire, so you have to just take that as you wish.As a musician who's owned some nice cars, I kind of related and didn't let his character interfere with the solid concepts.

He narrates well and doesn't speak too fast or slow or have one of those dreadful whiny accents. Plus he's talking about his own concepts, so there's more power and intent in his words.

Some of it is amusing in a "I've been there" kind of way but it's all pretty solid really. It did make me realise that some of the stuff that's in my way right now is only temporary and actually, I have some great things in my life which I started to think about and appreciate more!

I am not a religious person and always whince when you hear these "gurus" go on about religion and God (yeah, out of defference I am using a capital "G") Anyway, Joe Vitale talks about the Divine and the power out there, which I guess you have to believe in a little or you won't get anything out of the book. I think the underlying sentiment is you have to believe in yourself, no matter what your circumstance. To back that up he gives you some useful list-making opportunities so you can lay out your troubles in front of you and see what really is on your mind, so it is practical.I am pretty hard to please and retain a certain amount of scepticism due to being a "non religious type" I guess... However, I enjoyed the content and the delivery style and bought into this guy's sincerity and character. Give it a go and do what he says with his practical advice. It also made me realise I have it pretty good too, so maybe it did its job LOL.Hope this helps anyone reading this!