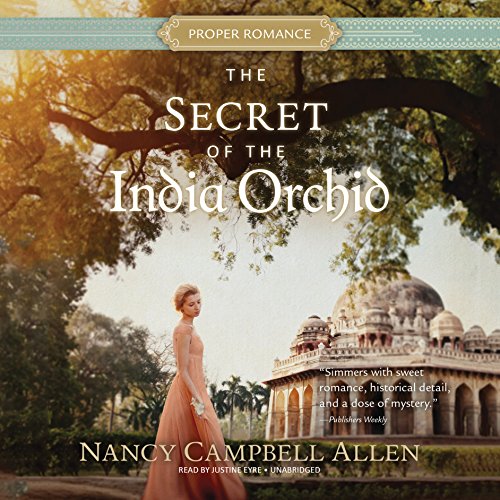 The Secret of the India Orchid

Anthony Blake is in love with his best friend's sister, Sophia Elliot. But his plans to court her are put on hold when he is forced to resume his role as an undercover spy for the Crown. A secret document listing the names of the entire network of British spies - including his own - has been stolen. To protect Sophia, Anthony cuts off all ties to her and exchanges his life as an honorable earl for the facade of a flirtatious playboy.

Heartbroken and confused, Sophia travels to India, hoping to find healing in one of the most exotic regions of the British Empire. But the exotic land isn't as restful as she had hoped. Instead, she finds herself embroiled in a mystery of a missing sea captain, a possible murder, and a plot that could involve the prince of India. And when Anthony appears at the British Residency, asking questions and keeping his distance from her, she is stunned.

She still loves him, and, in her heart, she knows he loves her too. But how can she rebuild her relationship with him if he won't confide in her? Does she dare offer her heart to him a second time, or will their love be lost under the India sun?

What listeners say about The Secret of the India Orchid

Very well narrated. An easy listen and a well written story. It has great characters and intrigue, romance and adventure. Well worth a listen

The Secret of the India Orchard by Nancy Campbell Allen is the second in a series, though the name of the series has not been given. I did not realize this until after I began reading, though, you don’t need to have read the first book (My Fair Gentlemen) to enjoy this book. The book is part of the “Proper Romance” sub-genre which are romantic stories without any sexual content.

We then meet our young heroine Sophia traveling to India to get away. She had formed an attachment with her brother’s best friend Anthony, but he ends their friendship unexpectedly and leaves the country soon after, leaving Sophia confused and upset. In India, she runs into Anthony. There they rekindle their friendship while also getting involved in a pretty decent murder mystery. At the very beginning of the story, we learn that Anthony had intended in courting Sophia, but he’s forced to leave England immediately when his former boss and spymaster recruits him for an important mission.

Anthony’s mission because a central part of the story, as the documents he’s perusing have come into the ownership of a guest of the house Sophia is residing in while in India. The murder mystery is engaging as well as the description of the English colonization of India in the mid-1900’s century. Sophia is aware of the cultural misconceptions perpetrated by the British Empire and while she’s socially enlightened it’s not to an extent that would be incongruent with someone who had lived at that time.

The obstacles to the romance are not the focus of the story, the narrative is being pushed by the outside forces such as the murder and the search for the documents that are driving the narrative and are driving the interactions between the two characters. The romance eventually resolves itself in an organic way and we get very nice interactions between Sophia and Anthony. They had been best friends and we see why they had gotten along so well in the past.

I’ve noticed that the Proper Romance novels focus more on the social and cultural aspects of the story. It has a tinge of Jane Austin and the social commentary that she provided throughout her novels. And while these are not at that level, they still give us an interesting, though sometimes superficial, view of Regency culture.

It was a wonderful book to hear. loved every minute of this unique book. It had many different parts.

Had great plot potential, but it felt too predictable for me... Good book idea though :)

I loved this story. All the classic recency romance elements, but with exotic additions and tons of extra drama. Lots of great characters and all their stories are beautifully intertwined.

Loved it, except for the portrayal of the pastor

As a Christian, I am highly irked by the often negative portrayal of pastors in literature, this story included. Other than that, I found this book to be excellent, beautifully written, and masterfully narrated.

This was a really good book. I liked the characters and the story. The narrator was also really good. There aren't any sex scenes for anyone who cares. Dual povs and an HEA. I would definitely recommend.

I'd recommend reading My Fair Gentleman first because it is about the h's brother and came before this book. It won't hurt at all to read this book first but I wish I had known because I would've liked to have read the first book prior to this one.

you can't get anymore bored

just a story anyone could figure out, zip chemistry, boring ongoing story ..I couldn't care what happen. it was an included story with membership and suffered through it

Mystery and continuation of great depth of characters. Strong men and women. Great narration as well. I look forward to more from this author and narrator.

Great book, loved everything about it. Justine Eyre was remarkable at portraying the characters. Read the first book then this one!

This story is wonderful!

The story is fresh, entertaining and well written. As for the presentation: I have fallen in love with Justine Eyre so often my friends think I’m gay!