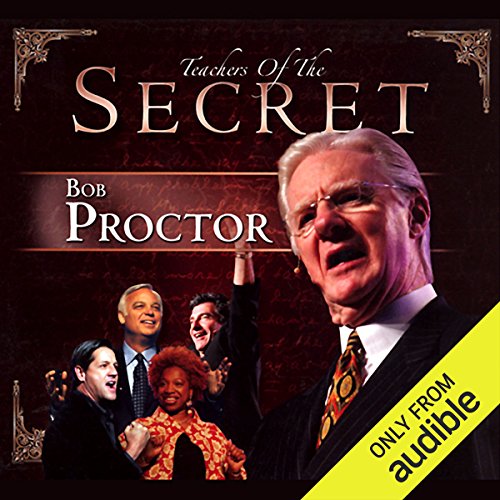 As one of the most revered teachers featured n The Secret, Bob Proctor is widely regarded as one of the living masters and teachers of the Law of Attraction and has worked in the area of mind potential for over 40 Years. He is the best-selling author of You Were Born Rich, and has transformed the lives of millions through his books, seminars, courses, and personal coaching.

Bob is a direct link to the modern science of success and the Law of Attraction, stretching back to Andrew Carnegie, the great financier and philanthropist. Carnegie's secrets inspired and enthused Napoleon Hill, whose book Think and Grow Rich in turn inspired a whole genre of success philosophy books. Napoleon Hill, in turn, passed the baton on to Earl Nightingale, who has since placed it in Bob Proctor's capable hands.

Hearing Bob Proctor speak about the power within will be a rich and rewarding experience.

What listeners say about The Secret

A one hour advertisement

This is nothing more than a one hour advertisement for his $2000 program. I love the secret and want to learn more about and embrace the law of attraction. This publication does neither. It truly was a waste of time and money.

I love Bob Proctor, he gets straight to the point and let you know what you need to do to get right in life. He’s like a father I never had. The best mentor session Is just listening to him and having a paper and pen taking notes. This is the best person you could ever invest in helping you to succeed in life.

He's the best at explaining how your mind works and why we get stuck in our ways.

Not what I thought...

I thought this was the entire book reading, but in fact it is not. It is a brief overview on the book in some seminar. Was pretty disappointed that it was not the actual book being read.

This is one of the best books in my library. I just love it a lot.

Only a very short audio to wet the appetite. Finally!! It's really out there, what I knew deep down inside. Mr. Proctor explains simply that there are patterns of thinking we adapted to that needs to go to be able to move forward, to loosen what's wanting to come into our lives. Got to buy all his teachings.

He makes me laugh, he makes me think, he makes me learn... Thanks to Bob Proctor I found my stair case to a greater life. Every time I listen to him, I'm happy and ready to take another step toward creating my fantastic life!