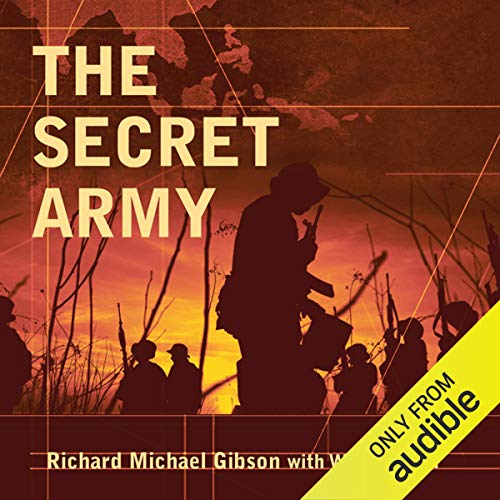 Chiang Kai-shek and the Drug Warlords of the Golden Triangle
By: Richard M. Gibson
Narrated by: Colin Mace
Length: 10 hrs and 45 mins
Categories: History, 20th Century
4 out of 5 stars 4.0 (1 rating)

The incredible story of how Chiang Kai–shek's defeated army came to dominate the Asian drug trade. After their defeat in China's civil war, remnants of Chiang Kai–shek's armies took refuge in Burma before being driven into Thailand and Laos. Based on recently declassified government documents, The Secret Army: Chiang Kai–shek and the Drug Warlords of the Golden Triangle reveals the shocking true story of what happened after the Chinese Nationalists lost the revolution. Supported by Taiwan, the CIA, and the Thai government, this former army reinvented itself as an anti–communist mercenary force, fighting into the 1980s, before eventually becoming the drug lords who made the Golden Triangle a household name. Offering a previously unseen look inside the post–war workings of the Kuomintang army, historians Richard Gibson and Wen–hua Chen explore how this fallen military group dominated the drug trade in Southeast Asia for more than three decades.

Based on recently released, previously classified government documents. Draws on interviews with active participants, as well as a variety of Chinese, Thai, and Burmese written sources. Includes unique insights drawn from author Richard Gibson's personal experiences with anti–narcotics trafficking efforts in the Golden Triangle. A fascinating look at an untold piece of Chinese—and drug–running—history, The Secret Army offers a revealing look into the history of one of the most infamous drug cartels in Asia.

What disappointed you about The Secret Army?

The white wash of American involvement in the insurgency, village rape, murder, servitude and the Drug trade. Lacked balance! Does mention the fact that their using American weapons but no real rigor in investigation.

Has The Secret Army turned you off from other books in this genre?

Have you listened to any of Colin Mace’s other performances before? How does this one compare?

Only book of his I read.

The book is dry and should have looked at the affect of the Chinese on the original people and also followed the drug trade along the line and also showed how it affect western youth.

Still did learn a lot about this subject but felt I was not balanced!