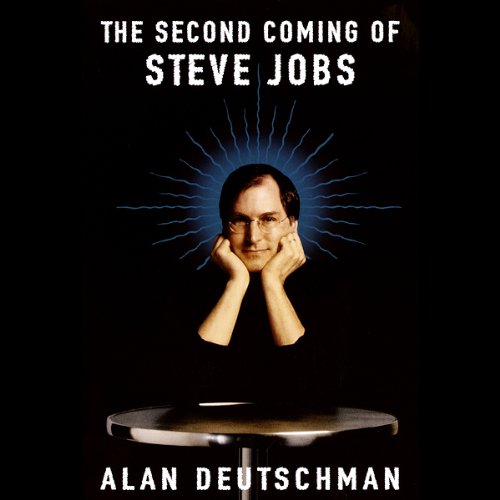 The Second Coming of Steve Jobs

From the acclaimed Vanity Fair and GQ journalist - an unprecedented, in-depth portrait of the man whose return to Apple precipitated one of the biggest turnarounds in business history.

When Steve Jobs became the acting CEO of Apple Computers, it was hemorrhaging more than a billion dollars a year. His return after twelve years of exile to the company he co-founded completely revitalized Apple. With the revolutionary success of the iMac, Apple turned a profit of over $600 million last year.

Based on interviews with scores of people - rivals, colleagues, friends - who have worked with Jobs over the years, The Second Coming of Steve Jobs presents the most revealing portrait yet of this extraordinarily complex man; how and why he almost gave up his career; the details of his negotiations with Disney's Jeffrey Kaztenberg and Michael Eisner and of the culture clash between Silicon Valley and Hollywood; his methods of leadership, management, creativity, and innovation; his friendship and rivalry with Bill Gates - and much more.

Since the early days of Apple, Steve Jobs has captivated the public. Now, as Jobs prepares to conquer Hollywood with his enormously successful animation film studio, Pixar, Alan Deutschman brings listeners what will be one of the most talked-about business audios of the year.

"...a behind-the-scenes account of the supreme showman's resurrection from high-tech oblivion to cover-story glory...likely to raise hackles - not to mention blood pressure - in the corridors of Apple Computer and Pixar Animation Studios." ( USA Today)

What listeners say about The Second Coming of Steve Jobs

Awesome background on Apple, NeXT, and Pixar.

If you have any interest in the computer industry at all, you will love this audio book. I was fascinated by the details that were given throughout the book. I was especially fascinated by the history it gave about Pixar, and the early years of computer animation. And if you have even the slightest interest in Steve Jobs or Apple, you will love it.

Some reviewers said the book was mean spirited, but I didn't get that at all. It seemed blatantly honest. Sometimes that was a good thing, sometimes not, And the use of profanity was few and far between, and was only when it applied to the story. Some people need to loosen up a little.

All in all, it was hands down my best audible purchase yet. I couldn't stand to have to pause my iPod when I got to work, and couldn't wait to pick up with the story when I left.

An interesting account of the later career of Apple's co-founder. It is not hagiography; it strives to give a coherent account of a very eccentric personality, and some of the traits and incidents described are fairly disquieting. You catch a glimpse, I think, of how compelling a presence the man must be.

He once double-dated with Bill Gates!

This book paints a good portrait of a man who, when all is said and done, comes across as mean spirited, egomaniac and a control freak. Jobs also comes off as a brat.
But it never shy's away from the truth.
I enjoyed it and recommend it to any Apple fan. You may come away less of a fan of Jobs as a person but more impressed as to what one man has done in the tech world.

This book was quite a good read and provided a lot of interesting background information about Steve Jobs, but the author's total ignorance of the technology on which Jobs' entire career is based makes you wonder about the accuracy of everything else. For example, he clearly doesn't know what a computer operating system is, nor is he aware of the difference between an operating system and an application program. He seems to think that you build a computer and then put some "software with icons" into it as a kind of afterthought. He is embarrassingly unaware of both the details and the broader view of the software and hardware technology in the development of both Apple and Steve Jobs' career. Nor does he understand anything about the impact that the technology has had on society. It's worse than getting things wrong, he just doesn't see it at all. It's an article about a high-technology story by a gossip columnist who barely understands that there is a difference between a computer and a typewriter.

This makes one wonder how accurate the rest of the book is. It makes for entertaining reading, but as another reviewer has pointed out, it is very, very fluffy. It is more a society piece than any kind of portrait of the phenomenon that is Steve Jobs.

If even a fraction of the stories about Steve Jobs reported in the book are true he is one of the most obnoxious and unsavory characters in the computer industry -- a narcissistic, immature and emotionally violent tyrant with delusions of grandeur and spirituality that are belied daily by his vicious and unfeeling behavior. But at the same time, the author comes across as an equally unsavory gossip columnist with an ax to grind -- at one point he slips in briefly that he felt badly snubbed by Jobs -- so all the reports should probably be tempered with a couple of pinches of salt. If Jobs is really the way he is described here no intelligent or creative person would ever work for him.

The combination of the writer's style, the subject matter, and the great narrator all add up to the best of all the audiobooks I've listened to. I noticed a theme common to many of these reviews--the addictive nature of this audiobook. It's great listening, and hard to turn off. If every audiobook was like this one, the the print book would be an endangered species!

A Must Have Audiobook, even for non-Apple fans

Reading the other customer reviews of this title, you might think that you have to be a fan of Apple Computer or its Macintosh computers to appreciate it. That is so not the case here. "Second Coming.." is a fascinating portrait of one of the key players in the technology revolution that has changed all of our lives. The author's profile of Steve Jobs plays out like a good fiction title, so that this is an audiobook that you will find hard to turn off until it is finished. Every great man deserves a great book about him, and whether or not you end up thinking that Jobs is such a man, you will likely enjoy this listen.

You don't have to be a Macintosh fan or a lover of computers to love this audio book, the account of Jobs' triumphant return to save Apple in 97' and his brilliant decision to buy Pixar from George Lucas when the scrappy techno story tellers where nobodies demonstates Jobs' true genius. Forget the fact the author doesn't really like Steve Jobs, if you look past that you can draw your own conclusion based on the amazing and whirlwind-speed variables in Jobs' life.

Fascinating, not Flattering to Jobs

I suppose that most readers will realize by the title that this is a rather harsh critique of Jobs. But it is truly fascinating reading.

I&#8217;ve worked with a few luminaries in the technology field. And it&#8217;s fascinating the extent to which there is not one right personality for great entrepreneurial success. Jobs may be more like Gates than their public personas suggest, but these men seem to have almost nothing in common with Robert MetCalfe, Jim Balsillie, or James Clark except that they are all successful high tech entrepreneurs.

In this regard the book is a cautionary tale to those who confuse personality with success or even those who over-emphasis personal traits as the key to success.

Very informative. The author gives a lot of insight into the way that Steve Jobs thinks. It certainly explains why Apple sometimes makes some decisions that are clearly not to the advantage of its customers. It also explains well how Steve Jobs is a master showman.

The Magic and Mayhem Behind the Icon

This audio selection kept me interested the entire drive from Baltimore to Pittsburgh... and back! Well narrated, this book tells of the visionary genius and social peculiarities of one of Silicon Valley's biggest personalities. Much of what I learned surprised me, and shed light on events and people that I had no idea were connected.

This is the first audiobook I have listened to and definitely not the last. I recommend this book for all who are interested in Steve Jobs, Apple, Pixar or technology. It is very interesting and the narration is very good - I highly recommend this title.

Explores the wider world of Steve.

The book gave some great background on Pixar and Next. Was well performed and easy listening.