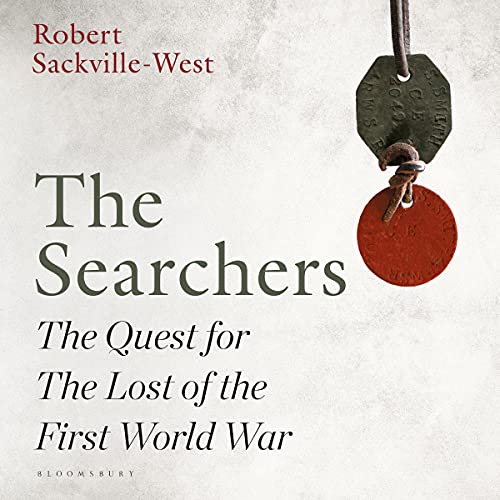 By the end of the First World War, the whereabouts of more than half a million British soldiers were unknown. Most were presumed dead, lost forever under the battlefields of northern France and Flanders.

In The Searchers, Robert Sackville-West brings together the extraordinary, moving accounts of those who dedicated their lives to the search for the missing. These stories reveal the remarkable lengths to which people will go to give meaning to their loss: Rudyard Kipling's quest for his son's grave, E. M. Forster’s conversations with traumatised soldiers in hospital in Alexandria, desperate attempts to communicate with the spirits of the dead, the campaign to establish the Tomb of the Unknown Warrior and the exhumation and reburial in military cemeteries of hundreds of thousands of bodies.

It was a search that would span a century: from the department set up to investigate the fate of missing comrades in the war’s aftermath, to the present day, when DNA profiling continues to aid efforts to recover, identify and honour these men. As the rest of the country found ways to repair and move on, countless families were consumed by this mission, undertaking arduous, often hopeless, journeys to discover what happened to their husbands, brothers and sons.

Giving prominence to the deep, personal battles of those left behind, The Searchers brings the legacy of war vividly to life in a testament to the bravery, compassion and resilience of the human spirit.

What listeners say about The Searchers

A great read! particularly interested in the details of how people reacted to the loss as individuals and as a nation! The care taken in identifying some of the fallen was heartening. This testament should be read by our unborn in order we can keep their memory alive!