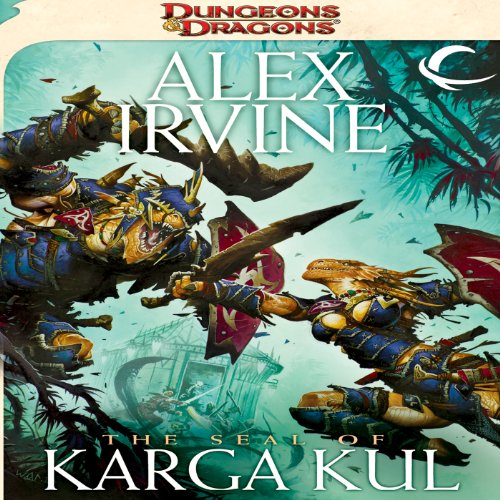 The Seal of Karga Kul

A tale of heroism and exploit in the tradition of Robert E. Howard....

Enter Remy, a quick-witted courier whose dangerous freight leads him into the vanguard of an ancient war between forces of light and the rising tide of shadows that threatens to overwhelm the burgeoning civilizations of the Two Rivers Gulf.

The story opens with Remy alone and near death after an encounter with several stormclaw scorpions. His horse dead and poison sapping his strength, Remy collapses with his package at his side, undelivered. When he awakes, he is in the company of a band of adventurers who found him by the side of the road and nursed him back to health. Among them is a grim dragonborn paladin named Biri-Daar, whose wariness of the magical seals on Remy’s freight is outweighed by an overwhelming sense of duty to those in need.

As they journey on, the nature of Remy’s package becomes a greater and greater curiosity. Soon the party, which has come to comprise some six-strong adventurers, finds itself to be the lynchpin that holds an army of netherworld forces at bay. Award-winning author and veteran shared-world writer Alex Irvine brings his unique characters and considerable storytelling talents to bear in the world of Dungeons & Dragons.

What listeners say about The Seal of Karga Kul

What made the experience of listening to The Seal of Karga Kul the most enjoyable?

I guess it was just the way it flowed. You really got the sense that 'holy crap everything outside the city is so dangerous' so it nailed the point of light feeling.

The eladrin, mostly because, well I could tell his introduction was mean tto simulate "character death then new character" but somehow he was introduced in a way that was almost seamless.

Its just a solid story, well written and well paced with decent characters and it feels a lot like a D&D campaign. The only problem I had with the story itself was that it was so clearly ghost written. There are a number of lore errors some not insignificant (Demons and devils are separate entities) but then suddenly when reciting a story or tale that lore will be corrected. I think its pretty clear that the basics of the story and what was wanted was rough draft written up, the handed off to a professional writer or editor to turn into something readable. So wherever the 'notes' given to the professional failed to clarify the professional just rolled with it resulting in all these errors.