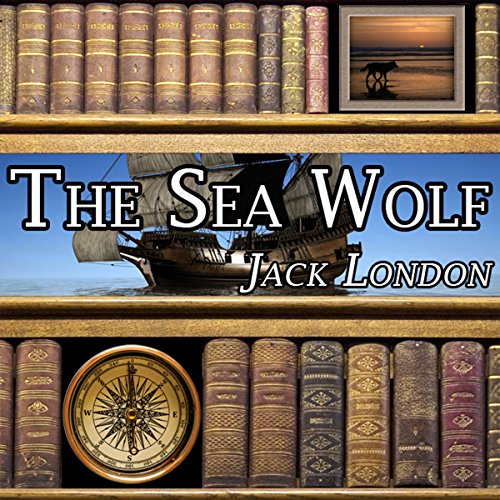 "The captain, or Wolf Larsen, as men called him, ceased pacing and gazed down at the dying man. So fierce had this final struggle become that the sailor paused in the act of flinging more water over him and stared curiously, the canvas bucket partly tilted and dripping its contents to the deck.

The dying man beat a tattoo on the hatch with his heels, straightened out his legs, and stiffened in one great tense effort, and rolled his head from side to side. Then the muscles relaxed, the head stopped rolling, and a sigh, as of profound relief, floated upward from his lips.  The jaw dropped, the upper lip lifted, and two rows of tobacco-discoloured teeth appeared. It seemed as though his features had frozen into a diabolical grin at the world he had left and outwitted....."

What listeners say about The Sea Wolf

This is an interesting, thoughtful meditation on psychology, ethics, religion all wound up in a pretty engaging adventure story. At points it comes across as hopelessly Victorian, but if you can overlook that, there is still a lot to recommend it. The main characters are exceptionally well-crafted and complex, the descriptions of the life at sea are penetrating and well-crafted. There is a reason why this is a classic, it's really quite good. The narration is fine.