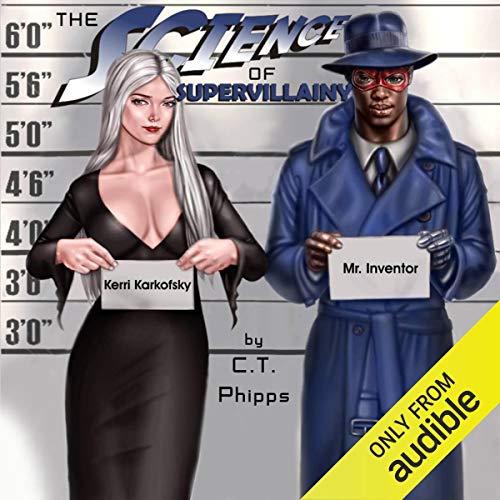 The Science of Supervillainy

The Science of Supervillainy

Gary Karkofsky a.k.a Merciless: The Supervillain Without Mercy (TM) returns in the fourth volume of the popular Supervillainy Saga. Having discovered the world's greatest superhero slain by his doppelganger from another reality, Merciful: The Supervillain with Mercy (TM), and the arrogant President Omega, Gary dedicates himself to overthrowing both. Unfortunately, this is harder than it looks since Merciful has all of Gary's genre savviness while President Omega has the entire brainwashed United States military behind him. In the end, though, there can be only one ruler of the world and two of these three feuding villains will have to go.

This was another great, hilarious and genuinely fun story in the Supervillainy Saga.
I won't spoil anything, but the plot was so good!
If you've listened to the other bools in this series (and you shouldn't start here, obviously), then you know exactly what you're gonna get.

What started off fun, became a chore to finish

Maybe this is true with all series... The first book in the series captured my attention and made me want to continue on to the next. But moving through the books beyond the first has been like walking through and increasingly viscous wall of Jell-O. Finishing off this last book in the series was more of a chore than a joy. While I love all of the snarky fun comments that Gary makes, and the pop-culture references galore (especially the nod to one of my favorite books "Soon I will be infamous") The story became so convoluted that I didn't even bother trying to follow it. I discovered Jeffrey Kafer in the D-List Villain books, and I am convinced the only reason I carried on with the series beyond the second book was simply for his endearing performance.

Not as good as the others

A very good series but I did not get as invested in this book. The story was just not as fun or quirky as the others.

Gary, aka Merciless, has woken up in a community of brainwashed people but with the help of Nightgirl he escapes. Other Gary is using his powers to rule Gary's home place. It's, once again, up to Merciless and cohorts to save the world, but by doing so they may have to become something they never wanted to be!!

OK so this is book 4 and by now you would think that the story has slowed down and become stagnant, but not so!! This is just as fast paced and entertaining as the other ones. It's also a little darker and a little more serious, but still has the wit and geekiness that I've come to expect from these books. The writing flows well and the story is exciting, intriguing and as well written as ever.

The characters that we've come to love are all present here, plus we get a new addition that you just know is going to be amazing!!! Gizmo has all the traits of her mom and dad and I loved her character. I can't wait to see what she will be like.

It's getting hard to write reviews for this series because I feel like I'm repeating everything I've said before!! I love this series and this author and highly recommend everything he writes. Can't wait for the next one.

Jeffrey Kafer is one of the best in the business. He makes for a perfect Merciless because he can bring across his snarky manner perfectly and has a strong grasp on using the right inflection at the right time. Brilliant.

I really liked the first three books in this series, but this one was my absolute favorite! So much comedy gold and quotable quotes that I'm going to relisten and write down my favorites, just so I can use them when I'm telling people about the series. The narrator did an awesome job with this, as he has with the rest of the series. Worth every cent!

Gets a little too navel-gazing

So if your at this point in the series you know what's what with a Supervillainy book. Silly snark, pop-culture reference galore, wacky battles, and just and over the top power fantasy. Or I should say you knew what's what because in this book Phipps decided to give his main character a perfect daughter as part of the power fantasy. That decision to focus on family over superheroic sucks the life out of this book.

The humor goes from irreverent to family sitcom blandness and the story grinds to a screeching halt to switch focus on how adorable everybody is being. I binge listened to the first three books in the series but this one I could not make it a third of the way through this book. Phipps has been one of my top guilty pleasure reads, but he missed the mark on this one. I hate to say it, but I think the Supervillainy Saga has run it's course.

I have heard Jeffrey Kafer narrate a couple dozen books, and his best performances are delivered in this series.
There is perhaps no worse (not evil, but poorly suited) villain that Gary “Merciless” Karkoffski. He is apparently the only person who realizes it though. He is a hero at heart but continues to cling to the fantasy that he is a villain. This recipe continues to deliver laughs, as well as touching emotional moments. This series is a winner!
I was given a copy of this audiobook for free in exchange for an honest review.

Not the best of the series

I have really enjoyed the series. However this book is based on a multi verse and I feel that it try’s to hard. The witty banter we have to come to expect is still there but the book just does not contain the spark the rest do. I still look forward to book five and hope C.T. Phipps can walk the story back to what it started as.

C. T. Phipps does a fantastic job at making an entertaining satire on the superhero genre. This next installment of the series keep the pace with great plot twists, relate-able pop culture references, but none at the expense of an entertaining story. Definitely a must buy. This was an audio book that was hard to put down/stop listening to. I strongly recommend it to anyone who likes action/humor/superheros/satire/or just straight up fantastic writing!

Another great sequel to a great series

Cloak's and super powered friends may not be enough this time to fight Gary's ultimate nemesis the president of the USA. Oh and his own deranged doppelganger.

This series was great!!! I absolutely loved the constant sarcasm and snark, the comity never stopped. Highly recommended!

a nice ending to an enjoyable story. I'm not sure if I want another one or just let it end though.

This fourth instalment of The Supervillainy Saga did not disappoint. It was packed full of all the action, humour, and crazy super powered happenings that we have come to expect from the series. As hilarious as this series is it also has some dark and cynical moments that offers great balance to the story.

I'm still loving the adventures of Gary Karkofsky a.k.a Merciless: The Supervillain without Mercy. Roll on book 5!

Jeffrey Kafer is the perfect narrator for this series. He is good at most things and really gets the tone of the story.