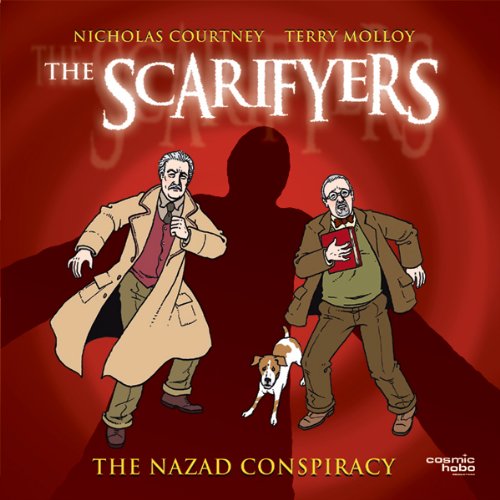 The Scarifyers: The Nazad Conspiracy

The Scarifyers is a series of rip-roaring tales of comedic supernatural intrigue set in 1930s Britain, distilling the likes of Dick Barton, The Avengers, The Devil Rides Out and Quatermass into cracking new audio adventures. The Scarifyers is broadcast on BBC Radio 4 Extra, and has been described as 'rollicking good fun', 'a slice of audio perfection', 'the smartest and most enjoyable thing on British radio' and 'like Tintin but with the lights out.'

So he's more than surprised when an invisible winged demon appears in his drawing room.The Metropolitan Police's longest-serving officer, Inspector Lionheart (Nicholas Courtney), doesn't believe in the supernatural either, wings or no wings.

So he's less than impressed when Russian emigres begin dying impossible deaths all over London.Together, Lionheart and Dunning must face quarrelsome Generals, sinister clowns and Russian demons as they unravel The Nazad Conspiracy.

What listeners say about The Scarifyers: The Nazad Conspiracy

Radio drama at its finest

A perfect blend of story, performance and production. Superb voice acting creates three-dimensional characters you care about in this horror comedy series. Doctor Who fans will enjoy Nicholas Courtenay's "Lionheart" as well as an A list cast of supporting voice actors.

I like this as the first story in the Scarifyer series. Very funny and imaginative.

Entertaining in a fluffy frosting sort of way

This was a fun little story. More music filler than I prefer. Solving supernatural crimes in 1936 England. Delightful idea with the right mix of skepticism and the unexplainable. I'll probably listen to another to see if the get their feet under them and keep delivering interesting stories that don't require your full attention. Perfect for falling asleep to as they're not long and if you have the timer set, easy to pick up from your starting bookmark and catch up to where you fell asleep.

What a ripping yarn

Very silly and very funny a total rest from the world. The performances were excellent I particularly liked the relationship between the inspector and the professor. I would recommend this audio book to anyone who likes the ridiculous. I will be getting the next in the series. In the meantime look out for things that go bump in the night!y

Well, that was fun

This was a very amusing ripping yarn. A fun plot, with nods in the directions of M R James and of Doctor Who, excellently voiced by Nicholas Courtney and by Terry Molloy (who sounds very like Derek Jacobi to me). Ludicrous, but fun.,and I found myself smiling almost all the way through.

Forget the madness that is 2020

Just sit back and listen to Braveheart and the Professor bring the bad guys to heal; assisted by a host of fantastic characters. I hope that Audible will complete the set and make available the missing stories. I can't pick a favourite story they are all so good and the casting is perfect.

Lionhart and Prof. Dunning meet for the first time. The start of a great team

took a while for me to listen to tjis, but ultimately a good story yes

found the music in the middle a bit irritating.

overall good light listening. Try to buy it on offer though because I think it was a bit expensive full price.

I loved every minute of it, well done everybody on it, great actors in it

Where does The Scarifyers: The Nazad Conspiracy rank among all the audiobooks you’ve listened to so far?

There is nothing quite like the Scarifyers. Comparisons could be made to The Hitchhiker's guide to the Galaxy or Andy Hamilton's wonderfully comic Harry's Game, but in truth, The Scarifyers stands alongside them in its own unique brilliance.

Fans of MR James and HP Lovecraft will pick up the loving references immediately, but others who don't take their turn of the century horror and weird fiction quite so seriously will still be amused by the frantic goings on of Dunning and Lionheart as they stumbled from one supernatural terror to the next.

Made to the very highest standards of BBC drama, the show provides fine performances, excellent script and the very best sound effects on radio.

The plots are knowingly over the top, but they work!

Have you listened to any of Nicholas Courtney and Terry Molloy ’s other performances? How does this one compare?

I have now listened to five Scarifyers and loved them all. They are quite independent of each other, but I would still recommend starting at the beginning. So far, there has been little to discriminate between them — if you love (or hate) the first programme, you are likely to feel the same about the rest (up to and including the fifth anyway).

Quite simply, everything works together to make this a very enjoyable show.

If you could sum up The Scarifyers: The Nazad Conspiracy in three words, what would they be?

I'd have changed the ending slightly - while silliness is part of the book's charm, the ending is a bit TOO nonsensical.

Lionheart and Dunning's visit to Alistair Crowley. Or possibly their introduction to Warlock.

I've listened to later 'Scarifyers' stories on Radio 4 - 'The Nazad Conspiracy' is thoroughly enjoyable but it's not the best of the series.