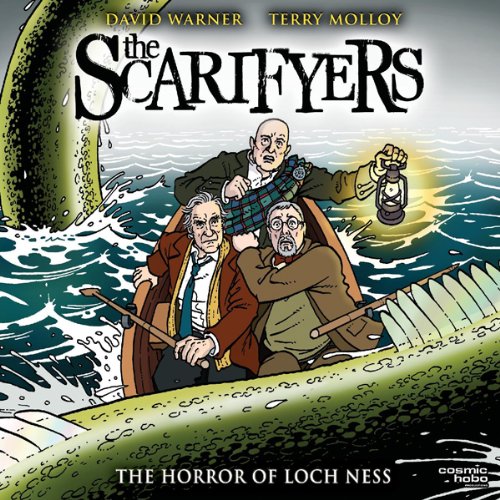 The Scarifyers: The Horror of Loch Ness

The Scarifyers is a series of rip-roaring tales of comedic supernatural intrigue set in 1930s Britain, distilling the likes of Dick Barton, The Avengers, The Devil Rides Out and Quatermass into cracking new audio adventures. The Scarifyers is broadcast on BBC Radio 4 Extra, and has been described as 'rollicking good fun', 'a slice of audio perfection', 'the smartest and most enjoyable thing on British radio' and 'like Tintin but with the lights out.' This is the seventh Scarifyers adventure. Celebrated speed ace Sir Malcolm Campbell (Alex Lowe) is carrying out speed trials on Loch Ness when a bank of fog suddenly descends. When it lifts, Sir Malcolm and his boat have mysteriously vanished.

MI-13's Harry Crow (David Warner) and Professor Dunning (Terry Molloy) are soon shaking up the sleepy loch-side village of Inver Farigaig. Aided by kindly local GP Dr Pippin (Philip Madoc), they discover a connection to the erstwhile Laird of Boleskine and Abertarff - occultist, bon viveur and occasional nudist Aleister Crowley (David Benson).Crow and Dunning swiftly realise that there's more to Inver Farigaig than meets the eye: fraudulent Nessie hunters, demonic bed sheets, Caledonian witches and things that go bump in the night. Joined by Crowley, their investigations into Sir Malcolm's disappearance will lead them into terrible danger, as an old foe threatens to unleash... The Horror of Loch Ness.

"Described by the Radio Times as 'rollicking good fun,'The Horror of Loch Ness is a must for all fans of old-fashioned radio adventure series like Dick Barton Special Agent. Just remember, this one has its tongue stuck firmly in its cheek." ( Edinbugh Evening News)
"There are few enough plaudits which can be thrown at this series. Pitch perfect in it's humour, production values and vocal acting, every new release feels like coming home to an old friend." ( Sci-Fi Online)
"A laugh-out-loud funny, thrilling story that riffs on, and draws inspiration from, film, television and literature, yet remains unique, reinventing the popular radio and pulp productions of the 1930s for the 21st century." ( Mass Movement Magazine)

What listeners say about The Scarifyers: The Horror of Loch Ness

If you're a fan of the other Scarifyer stories, you'll recognise some of the gags in this one, but with a warm familiarity that still makes them funny. The characters, as always, are brilliantly bonkers and the "Invisible Crowley" episode still makes me laugh just thinking about it. Off the wall and hilarious - definitely one for the collection.

Enjoyable, if a bit frantic

Where does The Scarifyers: The Horror of Loch Ness rank among all the audiobooks you’ve listened to so far?

Probably about halfway down - enjoyable, not memorable, and a little bit "excitable".

Hard to say, they all blurred together a bit.

Monsters, nessie fakers and Alistair Crowley being menaced by bed linen. This episode is audio heaven.

The witty one liners, sound effects and the cast are great. I have listened to this over and over again. Highly entertaining, light hearted comedy. Brilliant every time!!

Fantastic two hour full cast Scarifyers will entertain you over & over with this team. Get yourself a nice drink, a cosy chair, sit back, relax & enjoy!!
Laughs with the ghost busters & aliens galore. 👻

liked the meshing of the characters, a pot full of entertainment, bounding along to the conclusion, great yarn

Great rip roarer of a tale

I miss Nicholas Courtney as Lion Heart but the addition of David Warner makes it a brilliant tale to continue the Scarifyer stories. I liked especially the new dimensional twists and the sheer leaps of logic and twists of fantasy.

Great book well worth a credit and a good two hours of enjoyment.