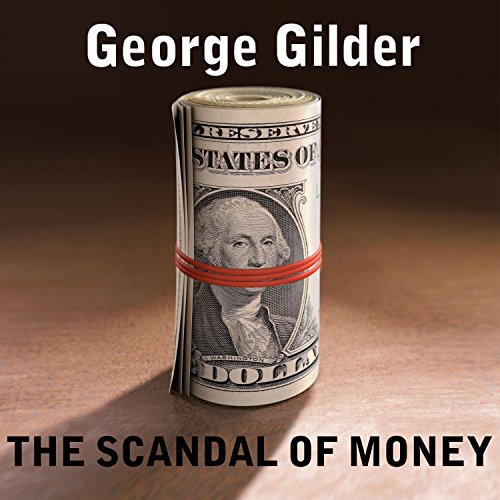 The Scandal of Money

Why do conservatives have such a hard time winning the economic debate in the court of public opinion? Simple, George Gilder says: Conservatives misunderstand economics almost as badly as liberals do. Republicans have been running on tax cut proposals since the era of Harding and Coolidge without seriously addressing the key problems of a global economy in decline. Enough is enough.

Gilder, author of the New York Times best seller Wealth and Poverty, proposes a completely new framework for understanding economic growth that will replace failed 20th-century conservative economics and turn the economic debate - and the country - around.

"George Gilder shows that money is time, and time is real. He is our best guide to our most fundamental economic problem." (Peter Thiel, founder of PayPal)

What listeners say about The Scandal of Money

The most important book and I've read in the last decade

This book really helped me to grasp why are our economy functions the way it does and how it could be made to function much better. Mr. Gilder manages to explain some very complex but important concepts in ways that are approachable to people without a degree in economics or finance but who have a good science background.

This book would probably be difficult to grasp if I hadn't taken college introductory economics and if I did not have a good science background.

Most importantly, Mr. Gilder is 100% spot on with his analysis of the world's economic problems and the solutions to those problems.

Finaly Clarity and Sanity please bring it on.

After the first ten minutes I felt for sure, I was not going to like this. After mercilessly tearing through the usual rhetoric; it started to become clear, this guy makes sense.

I don't have a good foundation in economics nor money theory, but I think I understand the author's points. Really look forward to a more egalitarian society where special privileges are stripped from the few, enabled by the new gold standard.

The book manages to be both repetitive and pointless. There are times when I thought that I had restarted a previous chapter but their content is almost indistinguishably similar. Obscure historic facts and quotes feel like unnatural filler to pad the word count rather than provide context.

He said, she said bs

Had 2 original ideas. Other than that, 99% of the book was just repeating other people's ideas on different matters.
If I needed to know their ideas I would've just bought their books.
Overall had nothing important to say.
Do not recommend if you want a concrete, new, original idea to be presented.

Summary: our "money" is a farce, backed by nothing and being inflated away. We need a gold standard.

There, I just saved you five hours. In all honesty, this is a decent book. Gilder absolutely describes what a house of cards our fiat money system is and why it is likely doomed to collapse. He also offers a prescription: a return to the gold standard. All of this is true, but is covered much better and in much more detail by James Rickards in his books (any of them work, but Road To Ruin is my favorite; I have not yet read Aftermath).

The bad part is that the narration is slow and awful. You will easily be able to listen at 1.75x or 2x speed if you have any finance/econ background at all. Also of less interest to most but kept annoying me as someone who has read many books on this issue: he kept bringing in physics, specifically the 2nd Law of Thermodynamics, entropy and "time's arrow" to get his point across. Nevermind that it probably only confuses most people but worse is that most philosophers of time would laugh at his tautology that time proceeds to what we call the "future" BECAUSE of the 2nd Law because this definition itself PRESUPPOSES that entropy increases OVER TIME. It presupposes and "earlier than" and a "later than." Anyway, this by itself doesn't have much to do with the conclusion, but it does get annoying that it is mentioned dozens of times.

I'm pretty sure this book is important.

However this is one of those books I'll have to listen to several times. At some point I hope I will understand the concepts, but I fear it may be beyond me. Someone said of some economic theories that if you don't grasp them in 5 minutes you probably never will. I fear this may describe my aptitude perfectly.

This book reinforces all the things I have learned about money and then expands on it. All good information and very true. This book can get you down because it's hard to take the truth, but that is the case with all books like this. This should be required reading in high school.