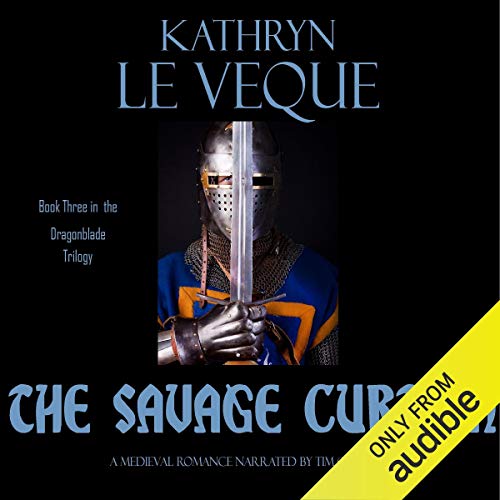 The year is A.D. 1333. At the conclusion of the English victory of Halidon Hill, King Edward appoints Stephen of Pembury the Guardian Protector of the newly captured city of Berwick. To cement this victory, he orders Stephen to marry the defeated Scottish commander's daughter, the Lady Joselyn de Velt Seton. In a marriage meant to symbolize the English domination over the Scots, Stephen is nonetheless attracted to his new bride; a petite, raven-haired beauty with pale blue eyes. Joselyn is a lady with a horrific past and dark secrets of abuse. She is resistant to the marriage at first but eventually her attraction to Stephen proves too much to resist and the pair fall deeply in love. But even as their love blossoms, Scots insurgents counter attach Berwick and Stephen is taken prisoner. As the Guardian Protector of Berwick, he is a mighty prize for the Scots and his public execution has been ordered. Stephen's old friends, Tate de Lara (Dragonblade) and Kenneth St. Hever (Island of Glass) must plot Stephen's rescue even as Joselyn and unexpected allies launch their own rescue attempt. It's a race against time to save Stephen from the executioner's sword in this tale of conquest, dark secrets, and everlasting love.

What listeners say about The Savage Curtain

This was a great story, and I enjoyed the narrator. HOWEVER, if I had to hear about the "cornflower blue eyes" of the hero one more time I'd have thrown my "listening device" at the author. Seriously, couldn't an editor have picked up the repetition?

This is the second time I've read this series but the first time on audible. I loved this story and would have really liked to give it 5 stars, the only thing holding me back was the overuse of the description of Stephens eyes. I know it sounds petty but it really dogs detract from my overall enjoyment of the story. I do enjoy the narrator and have listened to several of his interpretations and I will continue to and Katgryn le Veque is still up there with my favourite authors but please I get that his eyes were gorgeous.

What did you love best about The Savage Curtain?

I loved the fact the Stephen, the H, was such a compassionate man and healer as well as a fierce knight. I appreciated the inner strength of his love, Jocelyn, despite her history.
I also think that the setting, in the castle during an extended battle, was a fascinating setting for this love story!

What was one of the most memorable moments of The Savage Curtain?

I think that their less than auspicious begining was truly memorable! I can't imagine a more tragic first meeting. Well I could, but I wouldn't want one!

I truly enjoyed the plotting and bravery of Cade and Roman. Those two are memorable characters in and of themselves, but their courage, and the humour surrounding some of their actions really set them apart.

I think it was when Kenneth realized how and why one of his two best friends, Stephen, had fallen for Jocelyn. He was so thoughtful toward his friend's wife and his loyalty to that friend was not the only reason he felt the need to protect her. I believe he grew to respect and admire her as well. When he placed his hands on the sides of her face and turned away- I felt his angst over the situation.

This is a wonderful story and Tim Campbell did another fine job of narrating. I especially enjoyed his use of differing accents in this one! I recommend this audiobook to anyone who wants a terrific story!

I love how Kathryn writes her characters. She weaves depth, emotion, love and despair to the very end. Tim did a good job narrating.

Where does The Savage Curtain rank among all the audiobooks you’ve listened to so far?

One of my favorites!

What does Tim Campbell bring to the story that you wouldn’t experience if you just read the book?

He adds another dimension that makes the story more fun to read!

I recommend all of Kathryn Le Veque's audios!

What would have made The Savage Curtain better?

If the mention of the "cornflower blue eyes" could only have been mentioned a hundred times versus a thousand!

If you’ve listened to books by Kathryn Le Veque before, how does this one compare?

I really like Le Veques stories ............ the only thing that ruined this one was, have I mentioned them before? The cornflower blue eyes!

Would you listen to another book narrated by Tim Campbell?

All three of the above........ because of those bloody cornflower blue eyes!

Was this even written by Kathryn?

First book that I wasn’t even able to finish. Poorly written. Repetition. Juvenile characters. I can go on and on about my disappointment. Narration by Tim was on point as usual but he couldn’t even save this book. I’d also like to add that this is the first time I have even made a review or rated a book, but had to speak out to save someone else from spending their money on this scam of a book. Very disappointed.

Love It As Usual

I love Stephen's character. He has so much empathy, patience and support for Joselyn and her background is horrendous. How could she not love him. KLV always makes her characters live.

The book was an excellent listen. The narrator has a good voice. The story flows. The characters are all endearing.

The only thing I could complain about is "cornflower blue eyes" if I hear that again I am going to scream! The repetitive of that explanation of eyes drove me crazy. As always it was a great story!