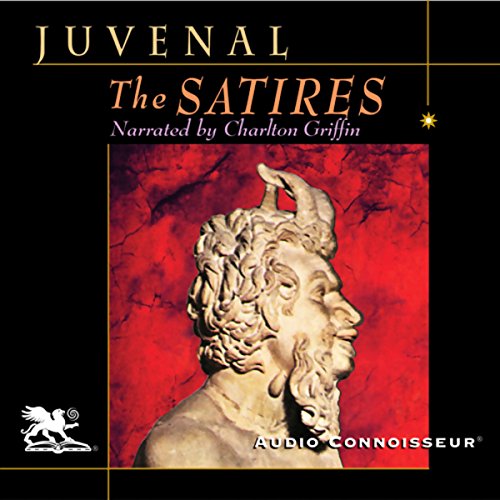 By: Juvenal
Narrated by: Charlton Griffin

To listen to The Satires by Juvenal is to come face to face with the corruption, the debauchery, the waste, the sloth, and the mean-spirited greed of ancient Rome...or is it more like modern times?

Indeed, these masterpieces of biting social commentary could easily have been written today about any number of metropolitan areas we are all familiar with. Almost anyone who comes into contact with these vitriolic rants against the foibles of humanity will be struck by the similarities to our own times. There are many famous catch-phrases from Juvenal that listeners will immediately recognize ("One rotten apple spoils the whole barrel," among others.)

Juvenal did not like Rome, or at least not what it had become by the late first century A.D. And, in poetry crackling with cynicism, outrage, and passion, he tells us in great detail precisely what he loathes about the times he lives in. In a rough, tough, and slashing manner, Juvenal has left us 16 satires on various subjects, including woman's vanity, sexual license, avaricious courtiers, base cupidity, heartless displays of vulgar wealth, hypocrisy, despicable aristocrats, back-stabbing social climbers, and vile superstitions. Nothing escaped his penetrating gaze.

Little is known about Decimus Junius Juvenalis, the poet we know as Juvenal. He took up writing in his maturity and lived from about 60 to 140 A.D., a period that encompassed the reigns of Nero through Antoninus Pius. He is thought to have been a soldier, but all we know of him comes from his own pen. Although easily one of the greatest satirists of all time, he was practically unknown until about 200 years after his death.

What listeners say about The Satires

This title brings to light the entertaining Satires of Juvenalis with a very good prologue and description of the time and place in which the poet wrote.

I have listened to this production several times and still pick up some hidden treasure from this writer.

Makes modern satirists look like a bunch of half-wit milksops. Juvenal’s envenomed poetry is excellantly realised by the narrator, who sounds suitably disgusted at the depth and scope of Roman depravity. A classic that has surely grown in subversiveness.

I really wanted to like this audiobook, but I was horrified by the sexism and homophobia. I endured until the "queens" part, then stopped. Yes, I understand it was written 2000 years ago, and attitudes were different. I just don't want to listen to it anymore.