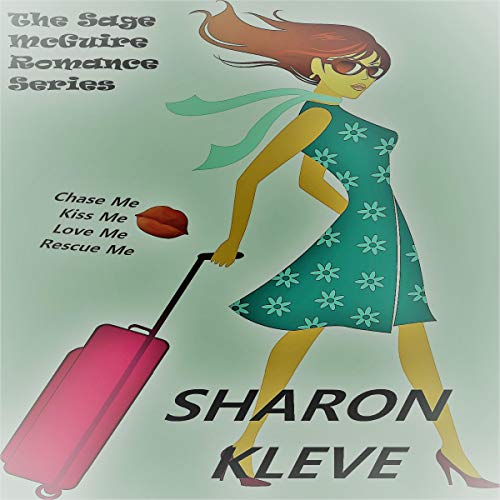 If you like Janet Evanovich's Stephanie Plum series, you’ll love The Sage McGuire Romance Series. It's a hilarious, entertaining, and romantic romp.

Four books in one volume!

Chase Me: Sage McGuire had a great job she loved. All that changed in the blink of an eye when her long-time boss, Mr. Smithfield, had an accident involving an over-sized rubber band. When Mr. Smithfield's semi-worthless son, Daniel, takes over Smithfield Laboratories, Sage figures it's time to turn her childhood dream of being a PI into reality.

After a night of unadulterated, mind-blowing sex Sage mistakes Sergeant Carter Morgan of the Portland Police Department for a serial killer and runs for the hills, but his sexy pine-cone scent and black leather pants have her coming back for more.

Sage's wild spirit, crazy red hair, and quirky sense of humor take Carter for the ride of his life and he's more than willing to stick around and see what kind of trouble Sage can get herself into next.

Kiss Me: Sage has left the security of her old job, as an executive assistant to a moron, and jumped feet-first into opening McGuire Investigations. If only her boyfriend Sergeant Carter Morgan's big gun and cop's intuition could save Sage from being grazed by a bullet to the temple, and another trip to the emergency room when she steals back her best friend's uncle's pooch, Mimi, from a psychotic loan shark in her very first case.

Carter's scary and conniving ex-girlfriend, FBI Special Agent Mia Williams, is back in town and full of trouble. Mia is determined to rekindle her relationship with Carter and she is used to getting what she wants - no matter what the cost.

Will Sage and Carter succeed in keeping each other out of trouble while falling head-over-heels in love?

Love Me: Bad-ass Sergeant Carter Morgan of the Portland Police Department takes risks for a living - but he'd never risked his heart before. From the first flirty look Sage flashes, he is hooked and it's been a roller-coaster ride ever since.

Mr. Smithfield, Sage’s old boss, appears in her dreams asking for help to avenge his death. Knowing full well it could lead to another trip to the emergency room, Sage agrees to help.

Rescue Me: Quirky private investigator Sage McGuire has her self-defense skills down pat, but still needs rescuing from a vicious lobster.

In addition to frightening crustaceans, she has a secret admirer known only as Smiley Emoji, a major and confusing case, and a purse-snatcher she has to go mano-a-mano with.

Sage is obsessed with her lack of cooking skills. When she flunks a cooking class, she is still determined to fix Carter Morgan, her sexy-as-hell boyfriend, a gourmet meal he will never forget.

What listeners say about The Sage McGuire Romance Series

These stories are such delightfully entertaining, romantic comedies. In Chase Me we meet Sage, Carter and her 3 girl friends. I loved the three friends and some of their antics are hilarious. Sage is fun loving, feisty, and a little crazy, but you just can't help but love her. Carter is a totally delectable hero. In Kiss Me we see how Sage gets her P.I. Business going. Her first employee is a hoot and promises some fun situations in the future. We also get to meet quite the psycho ex-girlfriend. In Love Me Sage proves to be a magnet for trouble and Carter continues to struggle with convincing her to be careful. You just gotta love this couple and it was nice hearing about how Ophelia and Bridget are doing with their love interests. Rescue me wraps it up with Sage actually avoiding getting hurt…well almost! She is such a fun loving character and her antics are always comical. Unfortunately Carly Kincaid didn’t give any of the characters a voice of their own and basically just read the stories throughout. She had a pleasant enough voice so once I realized she was just going to read to me I just sat back and listened to the stories and enjoyed some good laughs along the way. Thank you Sharon Kleve for such entertaining stories!